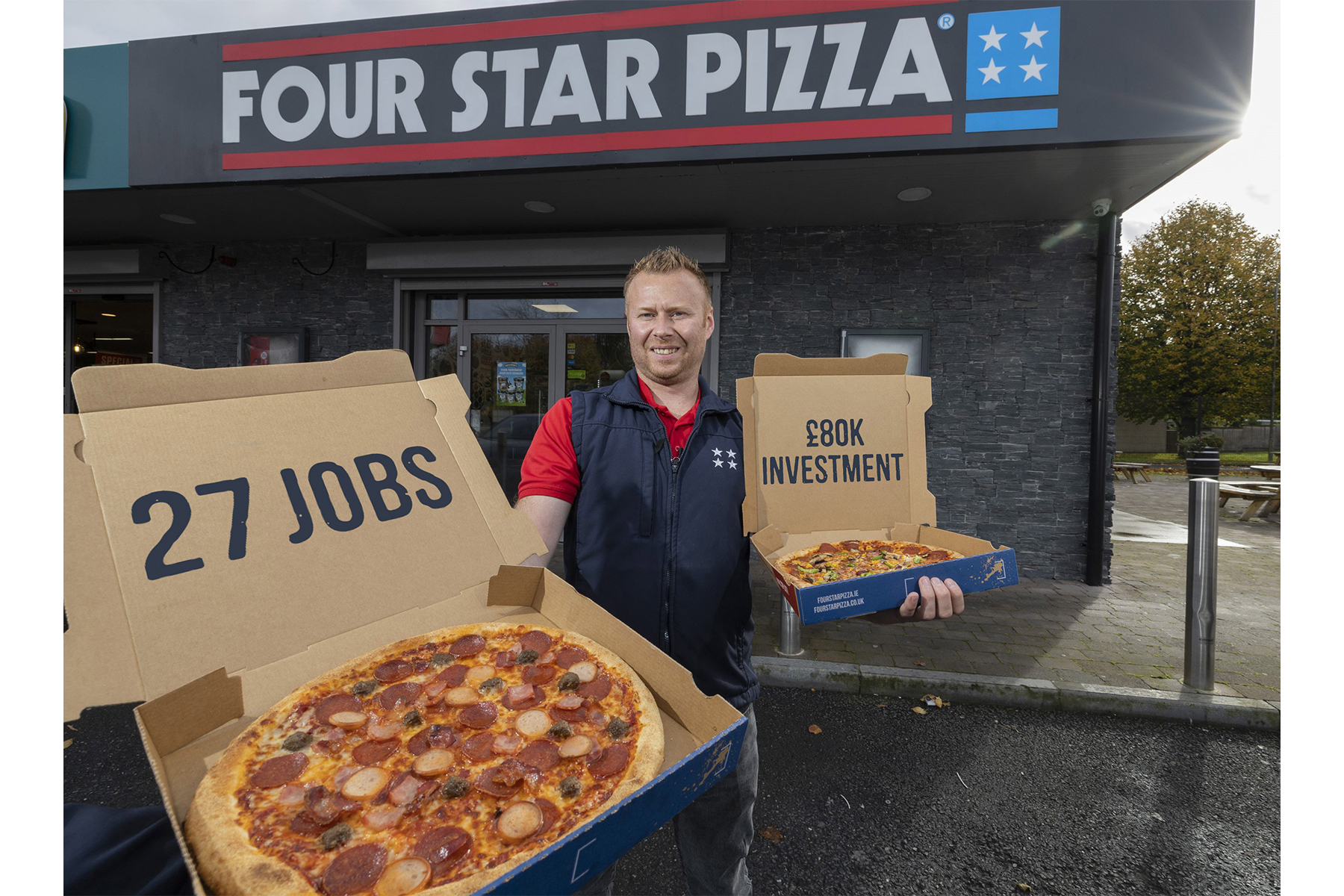 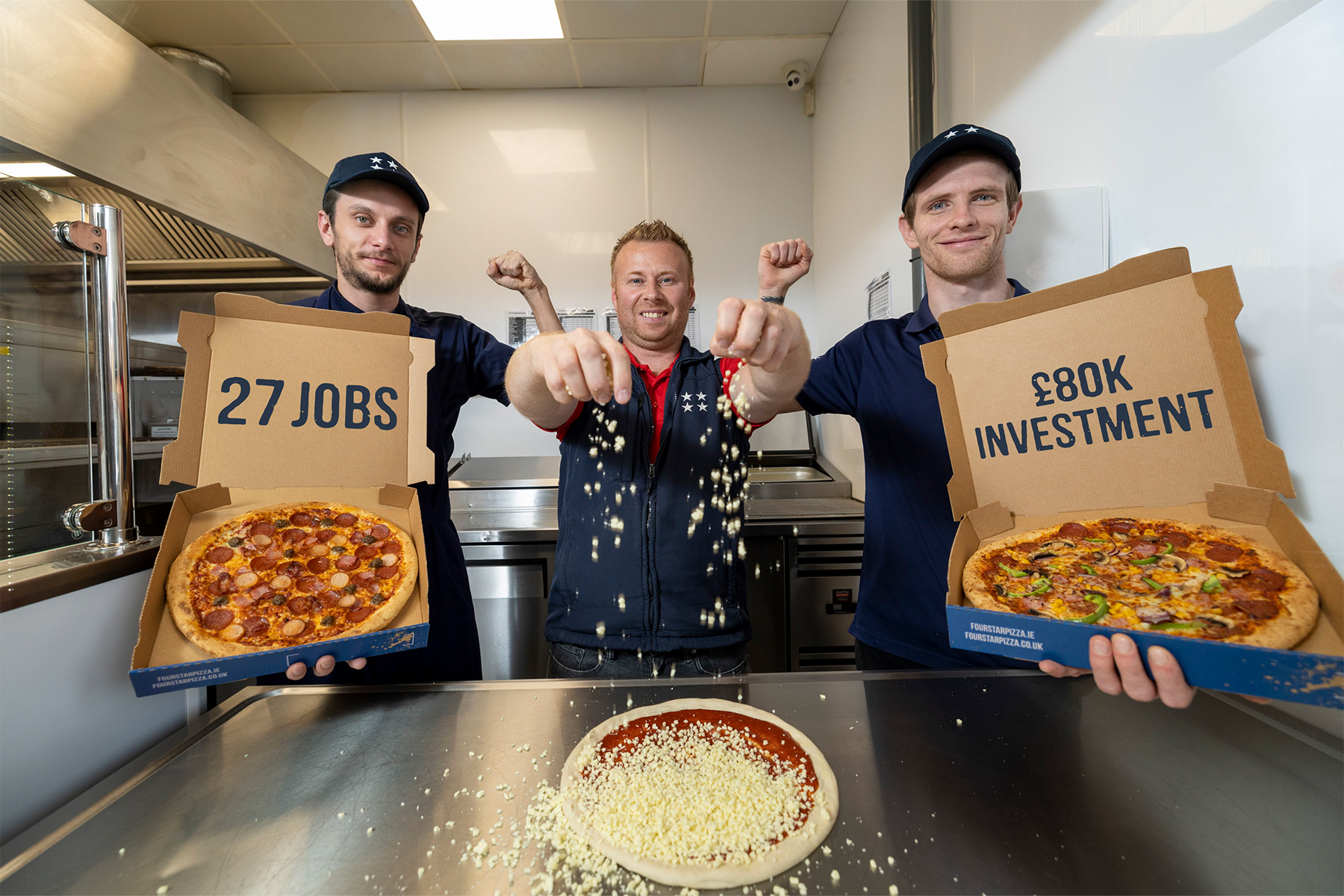 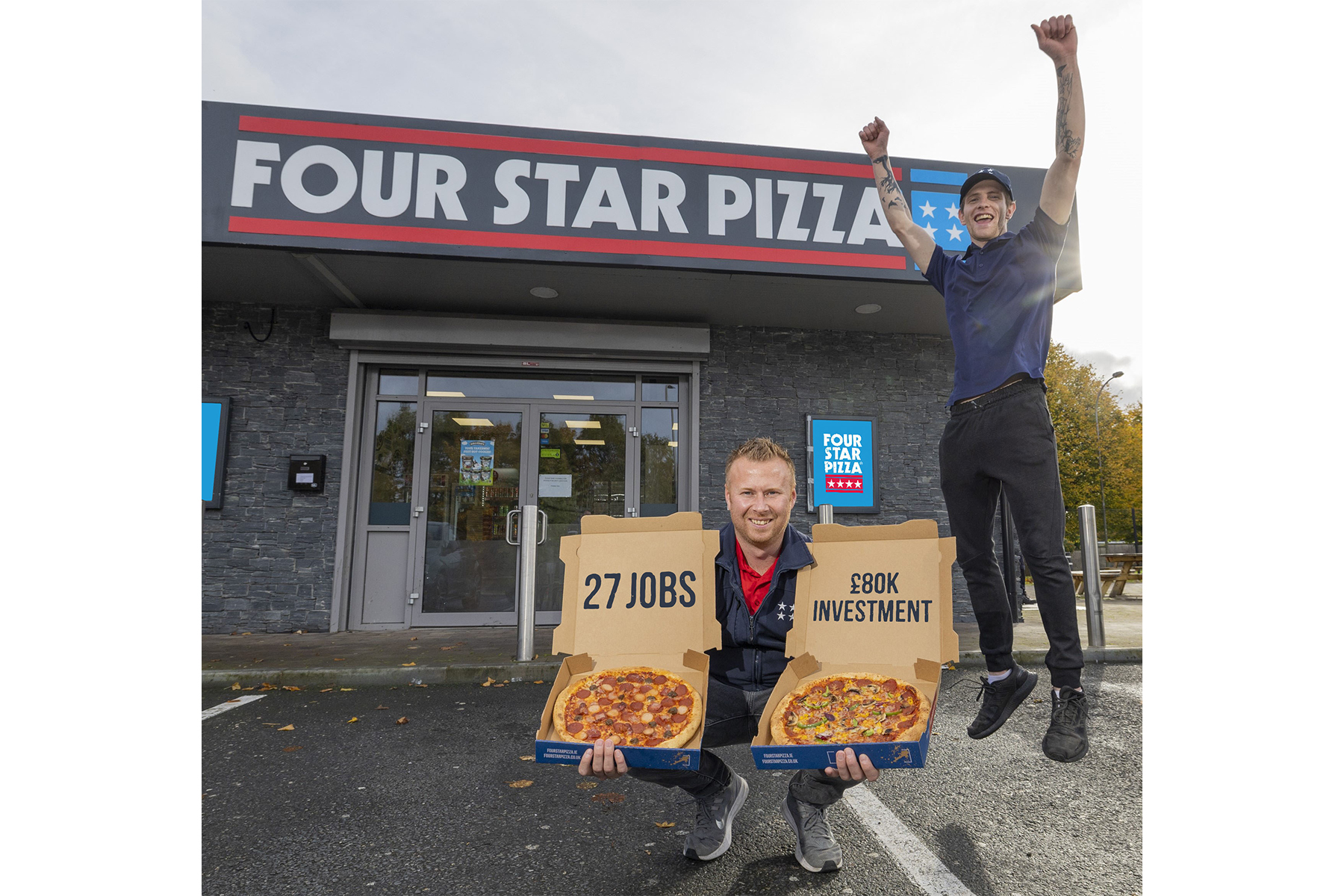 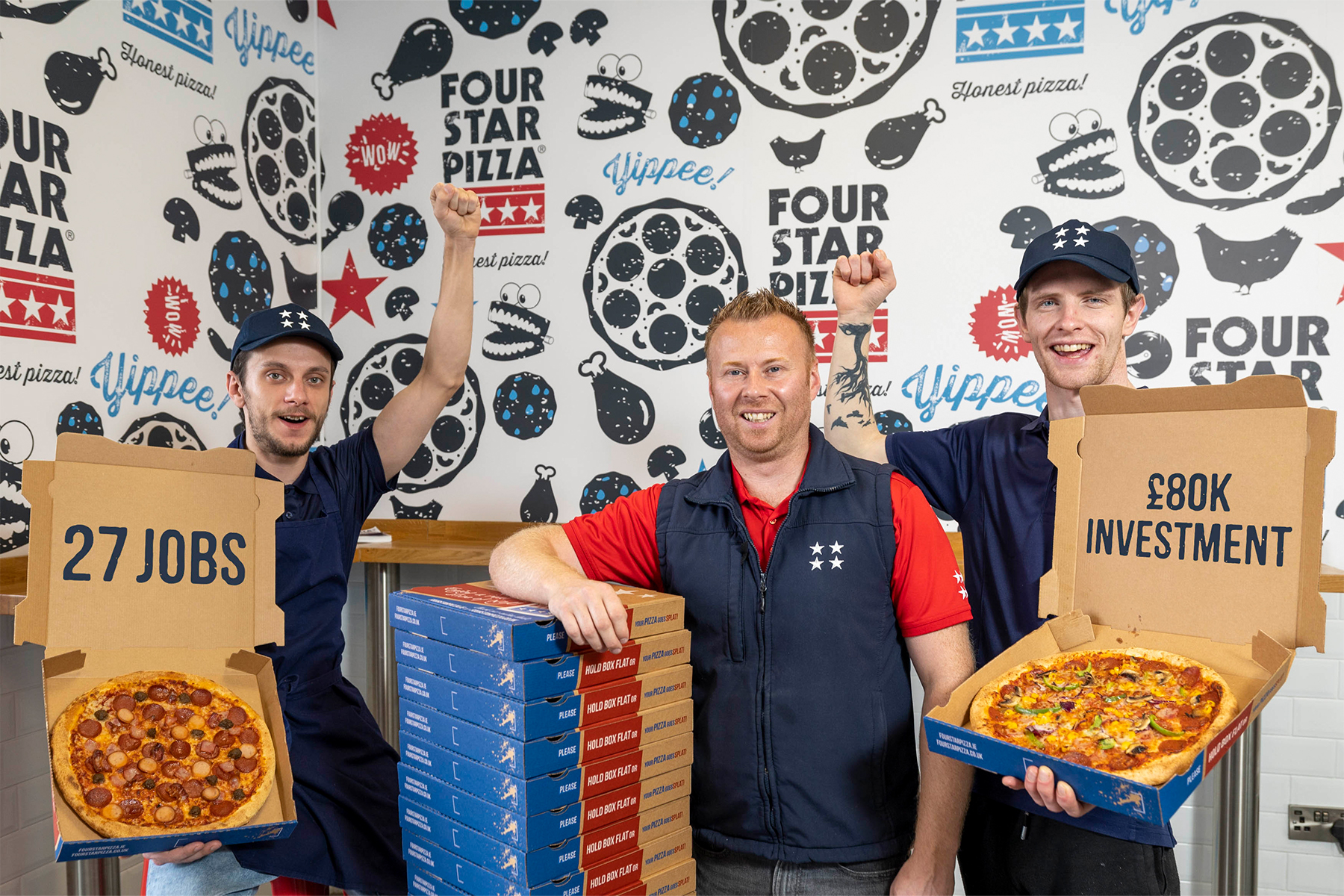 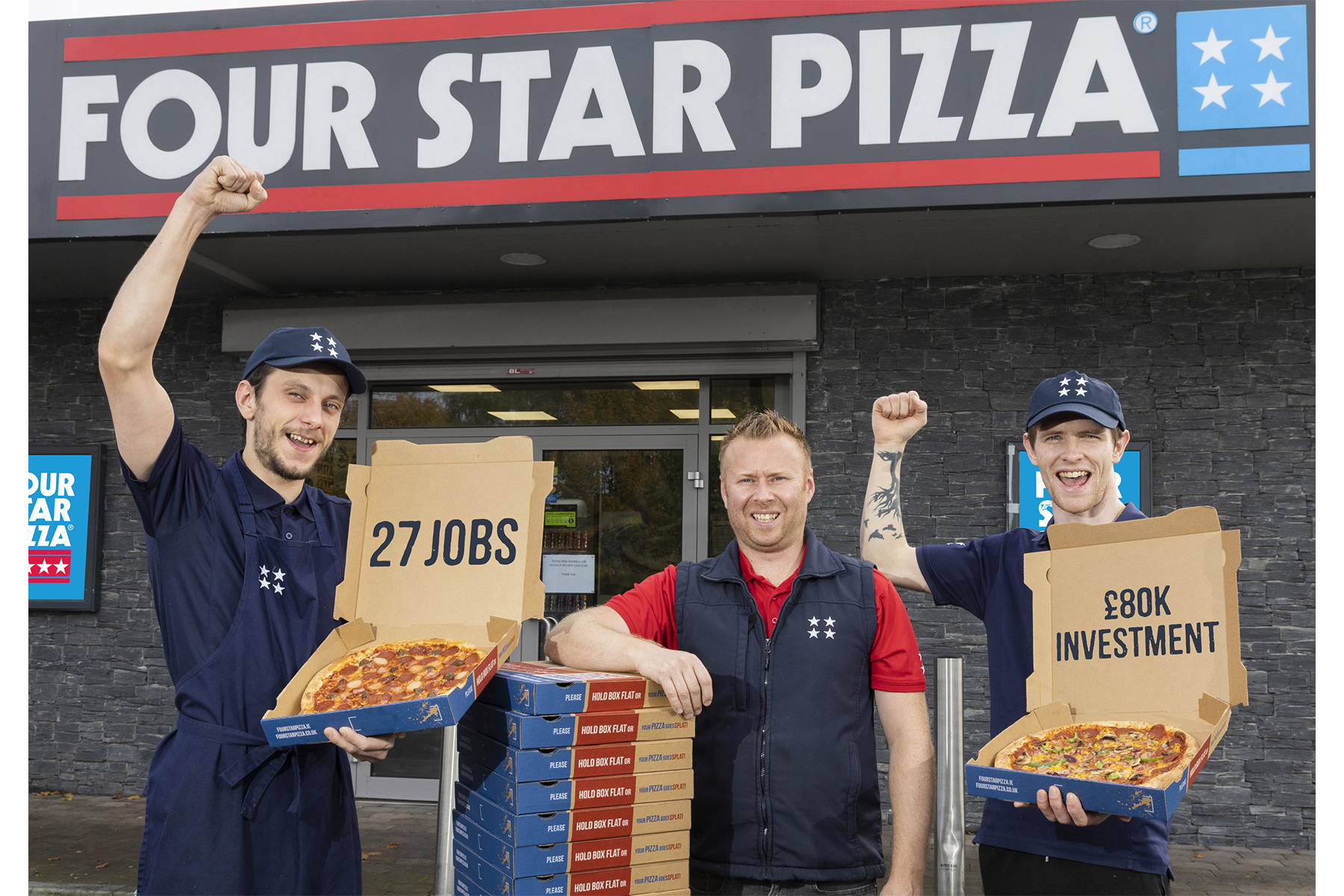 FOUR STAR PIZZA (FSP), Ireland’s biggest indigenous pizza company, has re-opened its Craigavon store in an £80,000 investment that will create 27 new jobs locally and breathe new life into the Lake Road area, where the store is located.

The newly refurbished Craigavon store is due to open its doors under new management on October 24th, just in time for the busy Halloween period.

“The Lake Road area of Craigavon already has an established Centra on the site, so I wanted to add to that with a newly fitted out store, equipped with the latest pizza-making ovens, offering our signature, quality pizzas and delicious sides to people in the town and surrounding areas.

“I’m delighted to bring my own Four Star Pizza experience to the area, having already invested more than £500k in Northern Ireland, employing 102 people – which will now will rise to 129 once Craigavon opens.

“Across all of our Four Star Pizza stores, our staff are all committed individuals and the team spirit is truly exceptional. So if anyone in the area thinks they fit the bill and would like to join the Craigavon team, I’d encourage them to get in touch as soon as possible,” he added.

Jobs on offer include counter staff, pizza chefs (aka ‘Doughologists’) and delivery drivers. Previous experience, whilst desirable, is not essential as training will be provided. Interested parties should contact Darren directly on lcolgan@fourstarpizza.co.uk.

When it comes to tickling the tastebuds of local pizza aficionados, Darren believes that the secret to a perfect pizza is ‘all about the base’.

“What will surprise a lot of our customers is that we actually make our own dough, fresh in store, each and every single day. That’s what makes a big difference between us and our competitors when it comes down to the crucial taste test.”

To celebrate the store re-opening, Darren and his team are offering customers a pizza for a pound.

“We want to let the people of Craigavon and the surrounding areas know that we are here, so we will be giving everyone a choice of three 7-inch pizzas – pepperoni, ham or cheese pizza – for a pound on November 2nd between 4pm-8pm for walk-ins only – one pizza per person, whilst stocks last. And for every pound spent, we will donate £1 to NI charity, Cash For Kids”, concluded Darren.

Pizza lovers can contact Four Star Pizza Craigavon by phone on 028 3814 0444, via their website at www.fourstarpizza.co.uk, by downloading the Four Star Pizza app or visiting the store’s Facebook page. Alternatively, customers can visit the store at Centra, 10 Lake Road, Craigavon.

Four Star Pizza currently operates 56 stores on the island of Ireland, 15 of which are in Northern Ireland. Plans are in place to increase that number to more than 100 over the next three years.