Change in Fortune for Furloughed ‘50 Bob’ 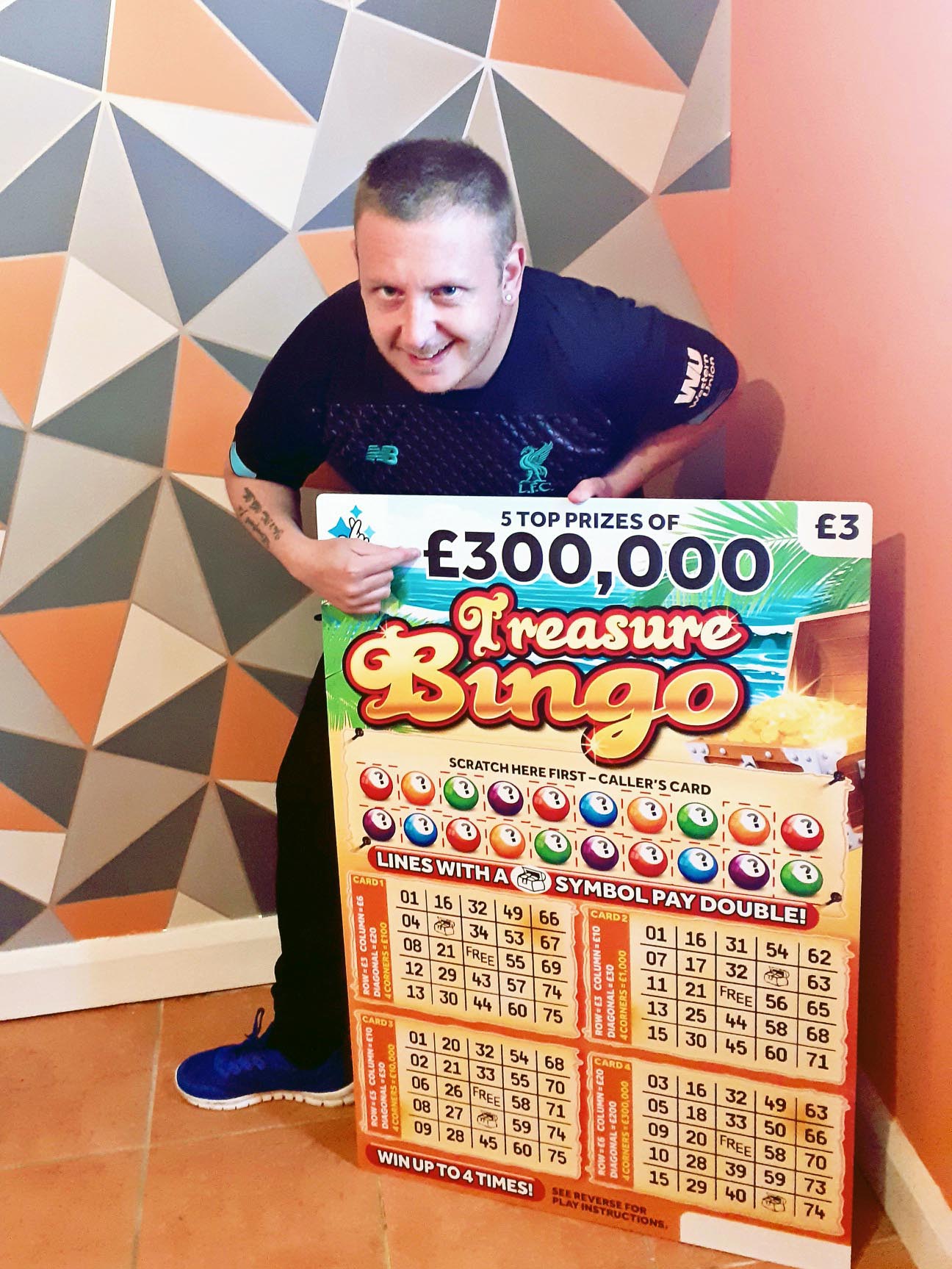 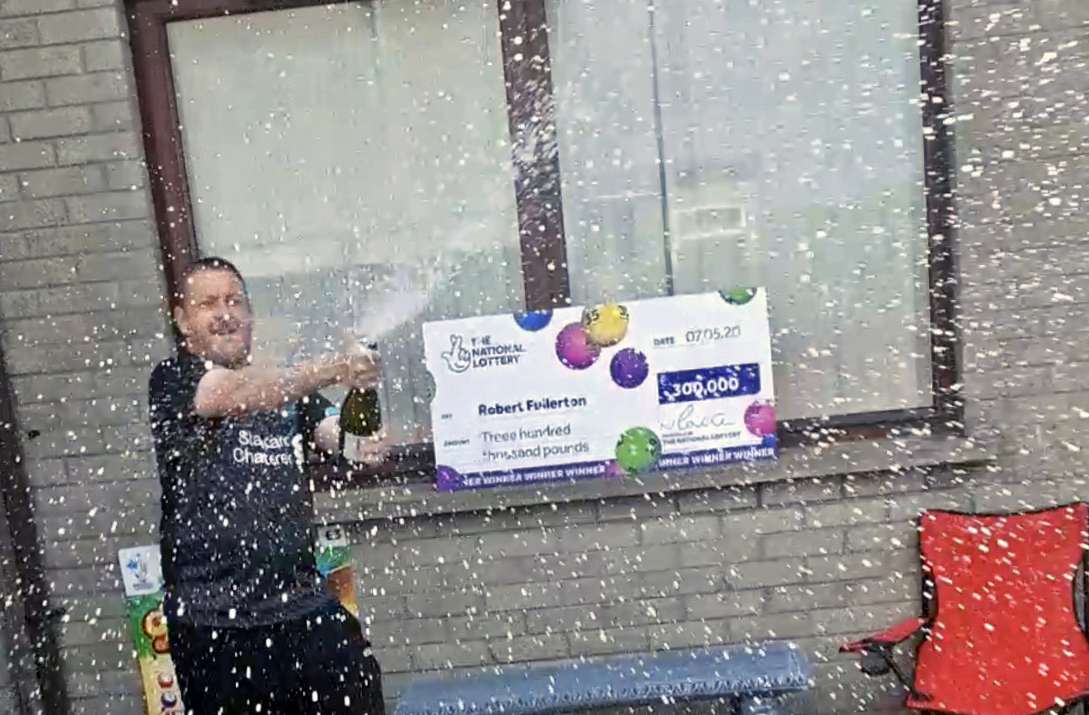 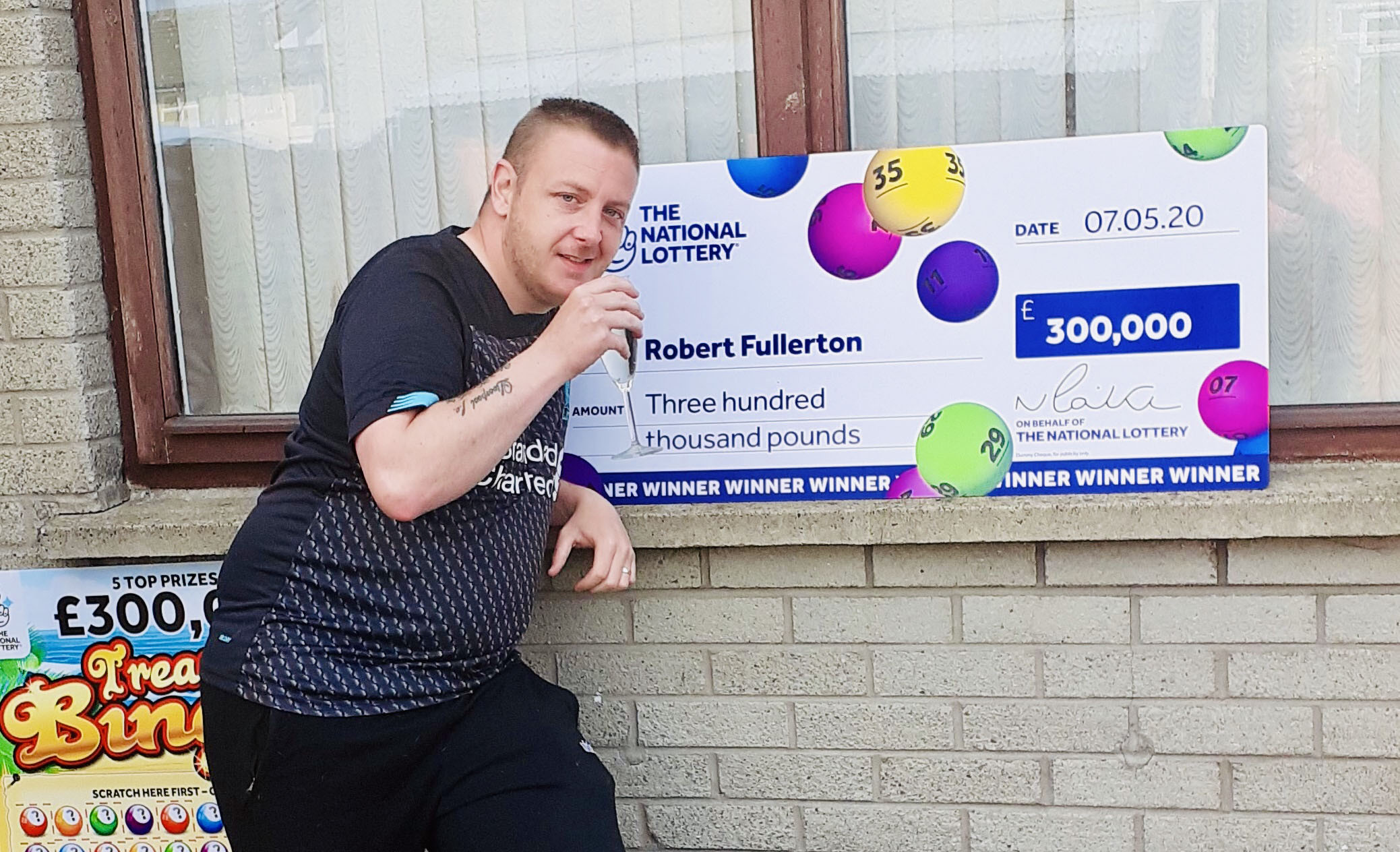 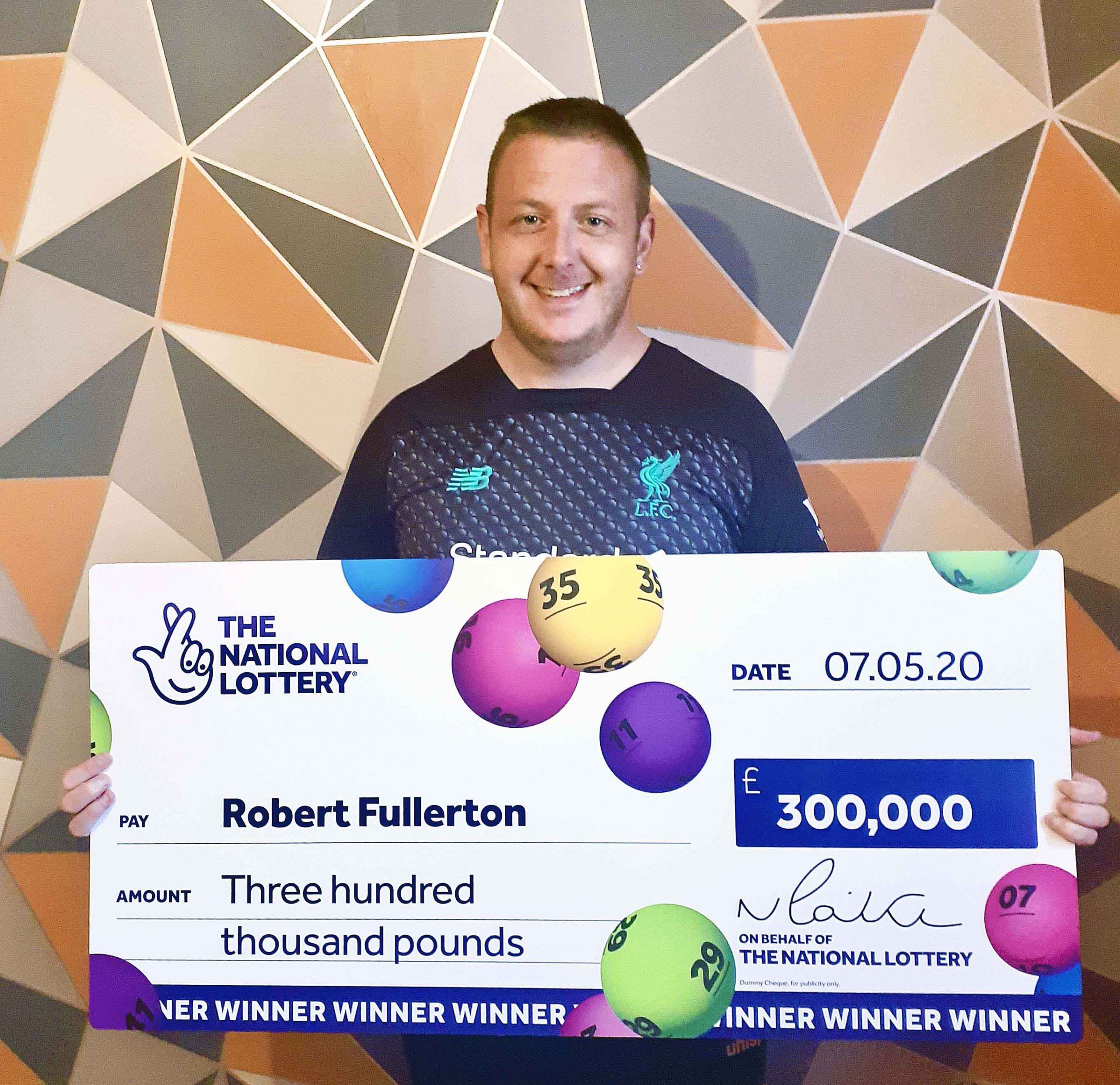 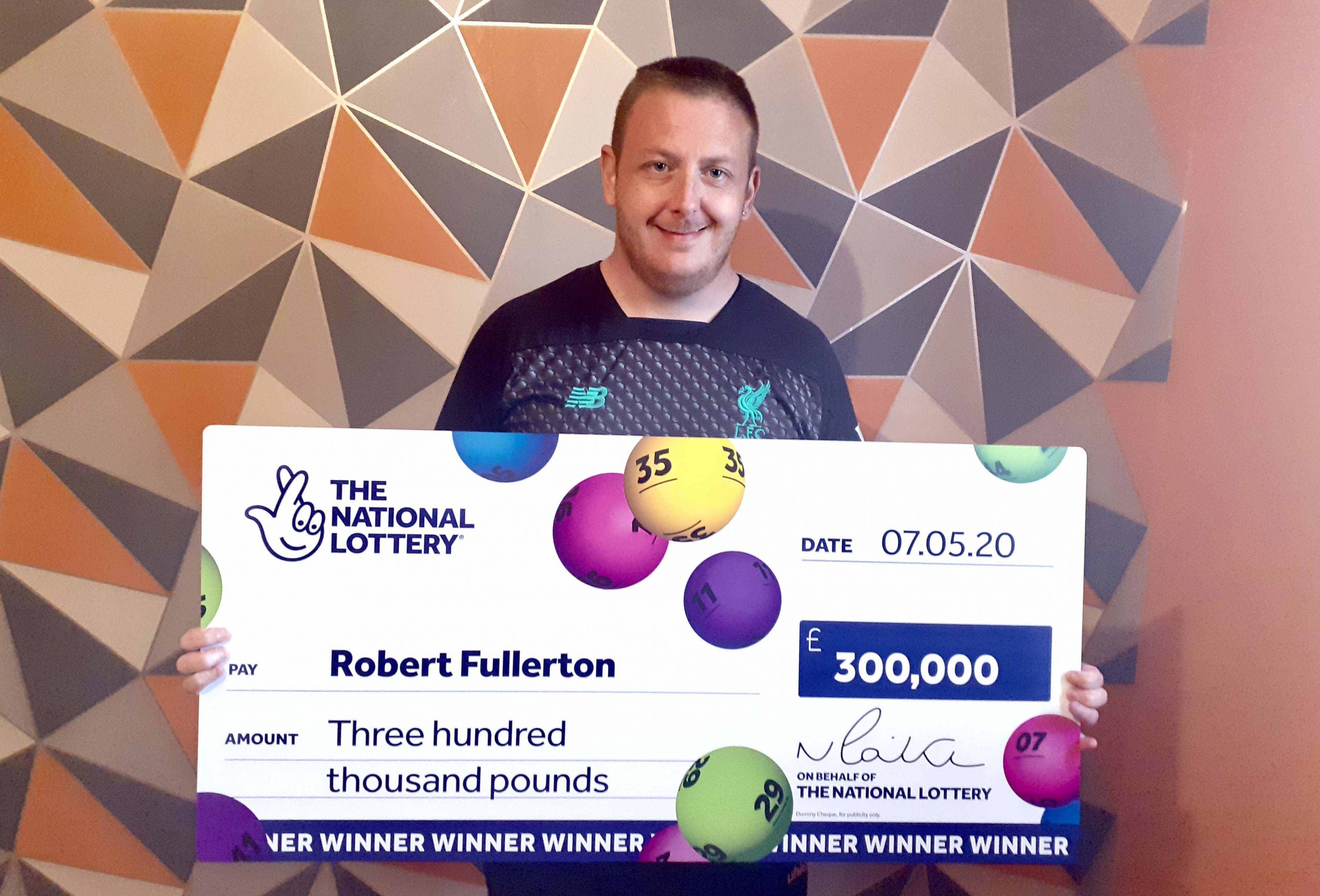 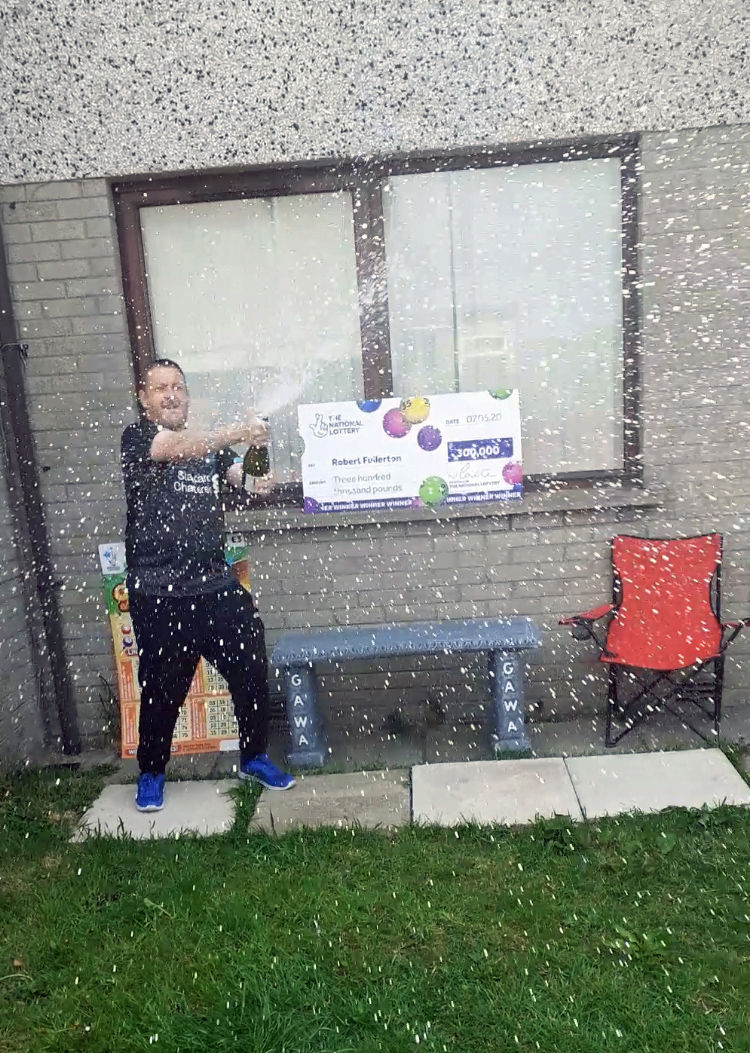 A furloughed kitchen paint sprayer from Castledawson in County Derry~Londonderry is celebrating a dramatic change of fortune after winning a massive £300,000 on a National Lottery Scratchcard.

Robert Fullerton (30) – known to his friends as ’50 Bob’ (after the rapper ’50 Cent’) – bought the £3 ‘Treasure Bingo’ Scratchcard at his local Vivoxtra store whilst shopping for some essential grocery items on Monday 4 May.

Little did Robert know that later the same evening he would discover he’d won an amount 100,000 times greater than the price of the scratchcard!

The incredible news comes as an amazing boost for Robert and his wife Susan (25) as both had been recently furloughed from the company they work for as a result of the COVID-19 pandemic.

Robert works as a spray painter and Susan as a machine operator for a leading local kitchen supplier and, like many across the country, have been furloughed for the past five weeks as part of the Government’s job retention scheme.

Robert explained how his life-changing win came about, “I was out doing an essential grocery shop and had a scratchcard in my pocket with a £3 win on it. So while I was paying for the groceries, I exchanged it for another similar National Lottery Scratchcard, and bought an extra one for good measure.

“I brought the two scratchcards home and played them that night.  I didn’t win anything on the first scratchcard and gave it to Susan to check, while I was scratching the second card,” he continued.

“Half-way through, it was already showing that I’d won £300,000 and I started physically shaking.  I was thinking to myself, ‘that’s not right’ and had to get up and go outside for some fresh air.

“I showed the scratchcard to Susan and took a photo that I sent to my mum and sister – both of whom agreed that I wasn’t seeing things and that, as far as they could see, I’d won three hundred grand!

“After a restless night, with little or no sleep, I called The National Lottery the following morning. They asked for some details and then, I’ll never forget, the lady on the phone said… ‘Congratulations, you have won £300,000’!

“My reply was ‘you what?’ My heart felt like it was going to burst out of my chest. In fact, I still can’t believe it. It’s like a dream come true, especially in these uncertain times when we’re stuck at home and don’t really know how our jobs will be affected by this coronavirus pandemic.”

Despite his  big win, Robert hopes to get back to work as soon as possible, saying that he loves his job and the ‘banter’ with his workmates.

But he has big plans on what he’s going to do with the money when the ‘lockdown’ is lifted, including a new house, a first holiday abroad with Susan and some driving lessons.

“The biggest thing we’ll do with our winnings is buy a new house in the area,” said Robert.  “As a keen darts player, it’ll definitely have a ‘man cave’ with a dart board and a big TV.

“Also, we know it might be some time away, but when people are able to travel again, we’ll go on a holiday to Benidorm.  The only times I’ve been abroad before were on school trips, so it’ll be amazing for Susan and me to fly off somewhere sunny.”

As a lifelong Liverpool fan, Robert says a new strip and a few trips to Anfield will also be on the cards.

“I’m a lifelong red,” he said, “so I’ll definitely be buying myself a new strip and making the trip across to Anfield a few times. If Susan supported Liverpool, I’d consider our own box at the stadium – but unfortunately she’s a Chelsea fan so that’s not really going to work,” he laughed.

After the coronavirus pandemic had disrupted his driving lessons, Robert plans to finish these when he can, pass his test as soon as possible and buy a new Volkswagen Golf car.

Robert said he never dreamed that he would win this sort of money, playing EuroMillions just once a month on average or buying a scratchcard ‘once in a blue moon’.  But he’s thankful that he bought one when he did.

“Never in my wildest dreams did I ever think we would win something like this,” he concluded.  “I suppose no-one thinks they will but at the end of the day it has to happen to someone and we’re very grateful that it’s landed on our doorstep on this occasion.  We’ve never had a lot of money and what we have we’ve worked hard for. It just goes to show that it really can happen to anyone.”

The traditional National Lottery win celebration has had to be put on ice with the current social distancing advice from the Government, but Robert has promised both himself and his family a party when the time is right.

In the current situation, National Lottery players are encouraged to play online at national-lottery.co.uk or by downloading the National Lottery app, and to only buy their tickets in retail as part of their essential shop. Playing online via the website or app means that your ticket is checked and you get an email notification if you win a prize. You can also scan your retail tickets on the National Lottery app to check if you’re a winner.

Thanks to National Lottery players, up to £600M will be used by charities and organisations affected by the impact of the coronavirus outbreak across the arts, community and charity, heritage, education, environment and sport sectors. This includes up to £300M in funding support from the National Lottery Community Fund which will be used over the next six months to help groups best placed to support people and communities through the crisis – from helping support food banks to causes that combat loneliness and isolation, support for the elderly and projects that aid health in the community. By playing The National Lottery, an average of £30M is raised every week by National Lottery players for projects big and small across the country.