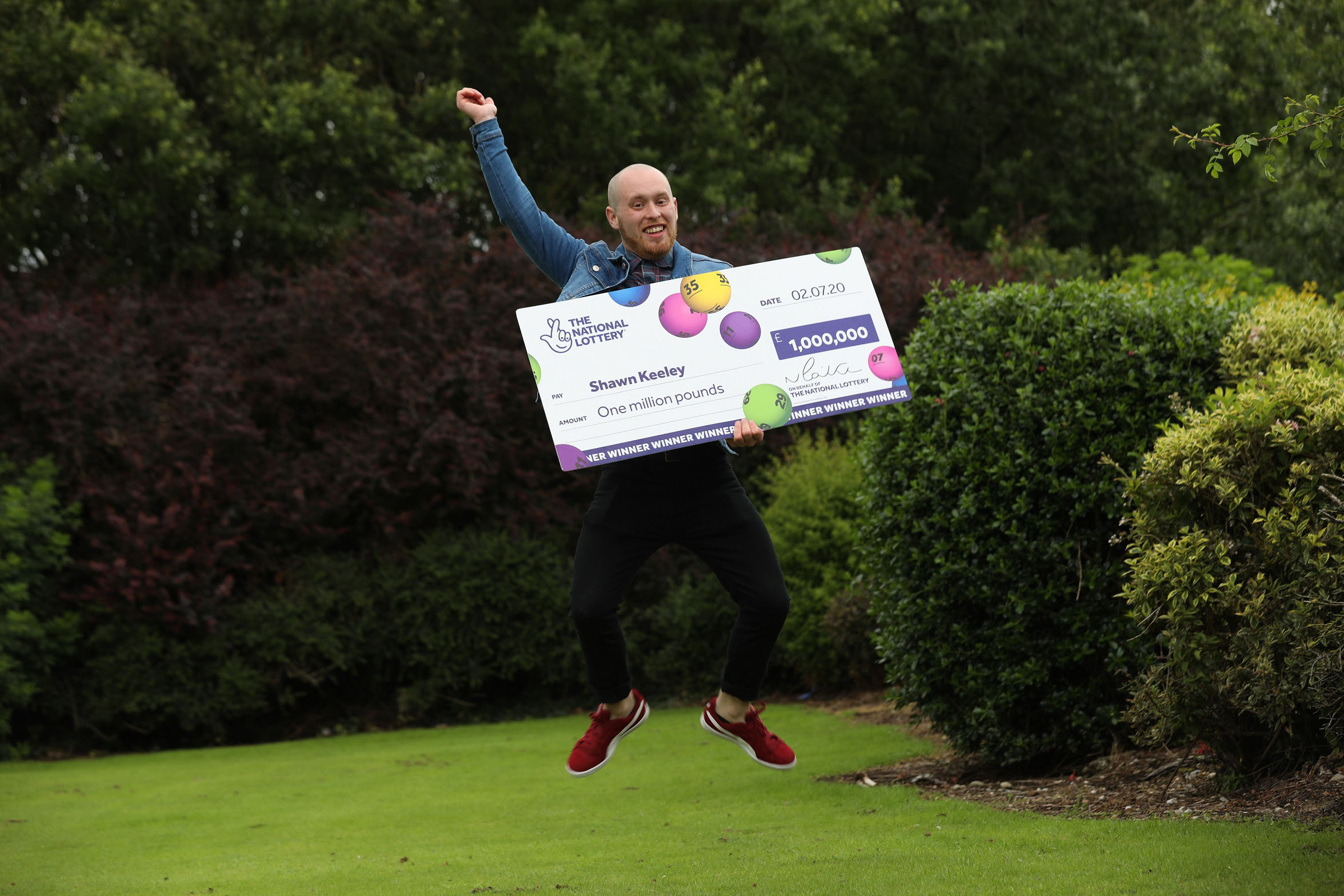 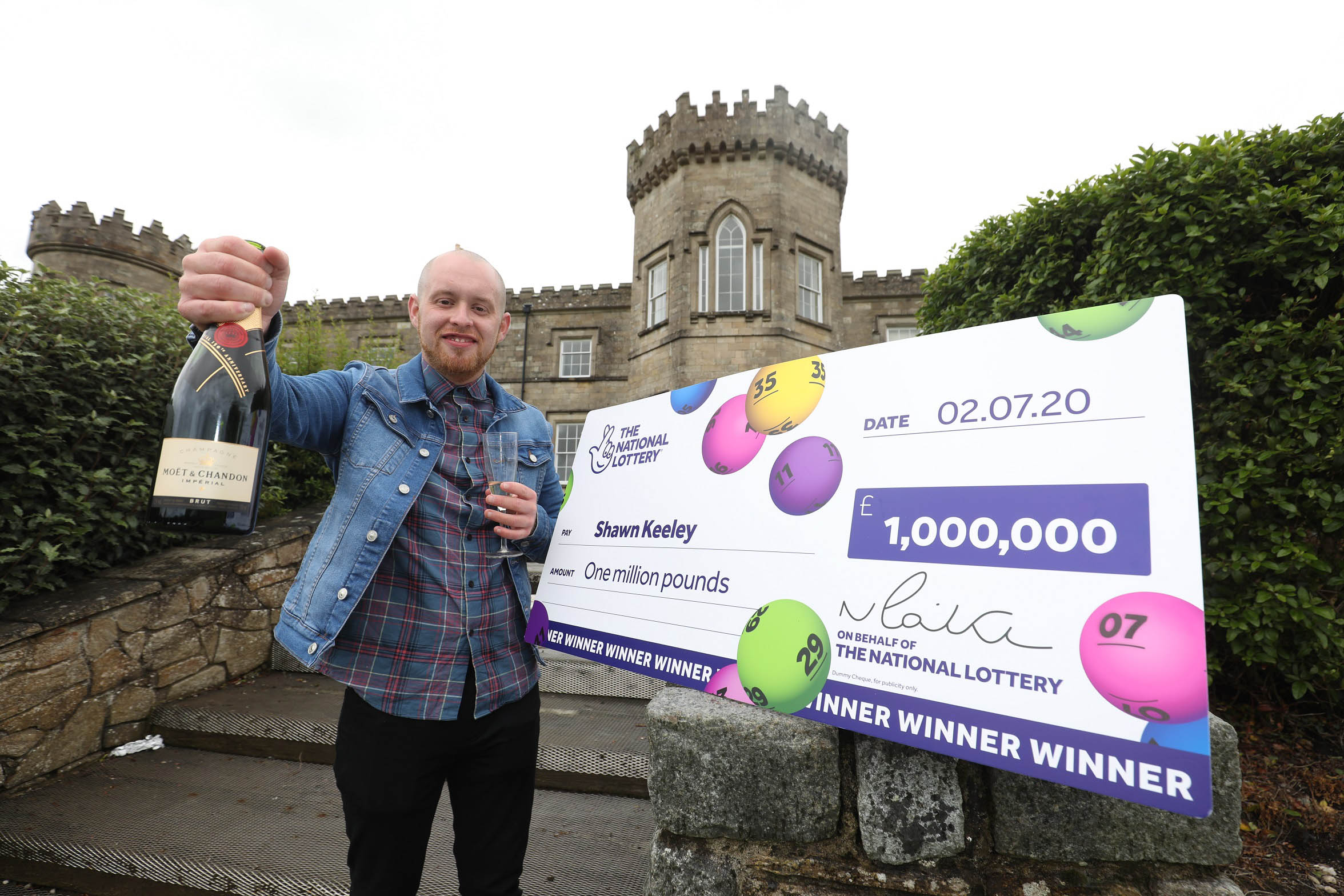 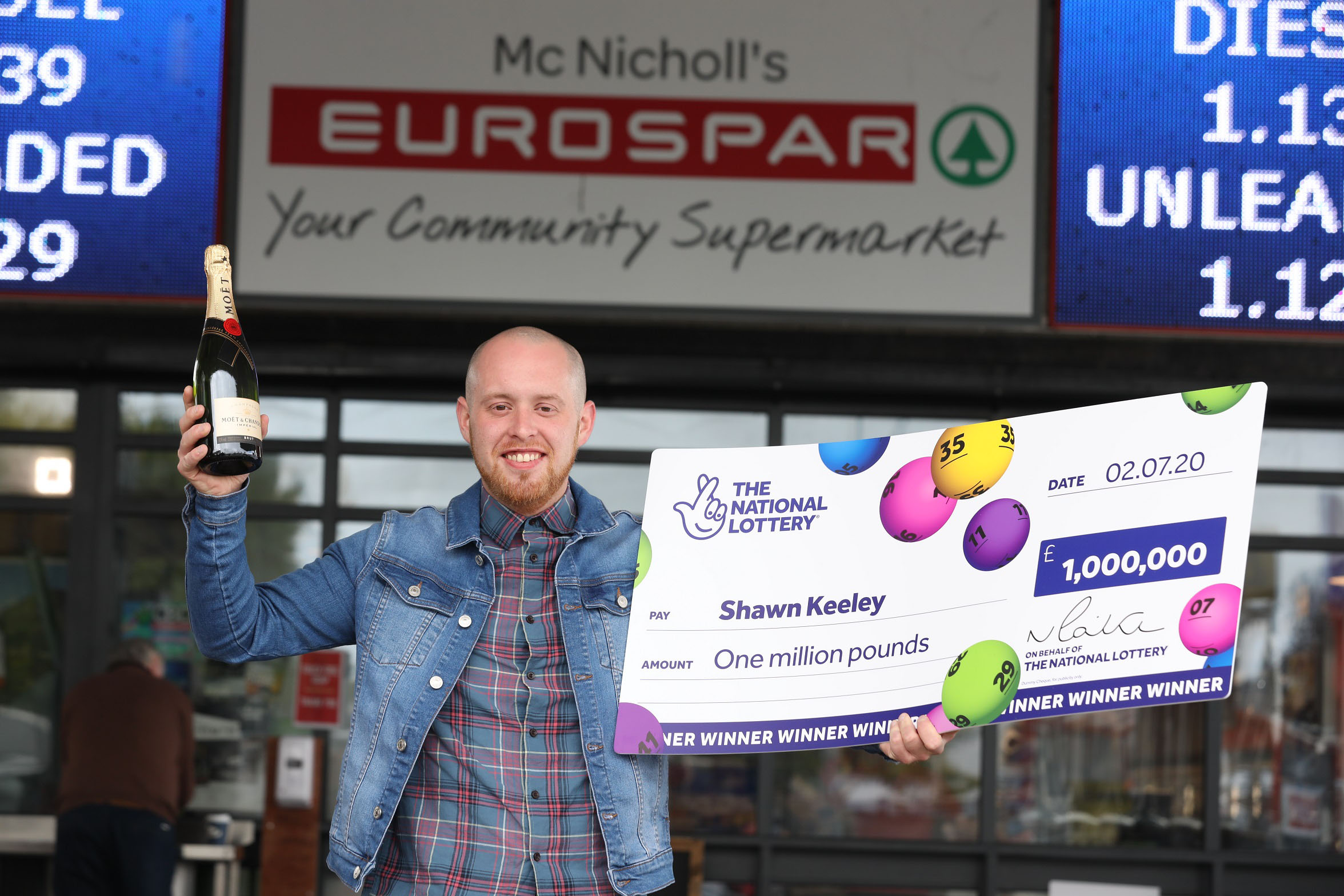 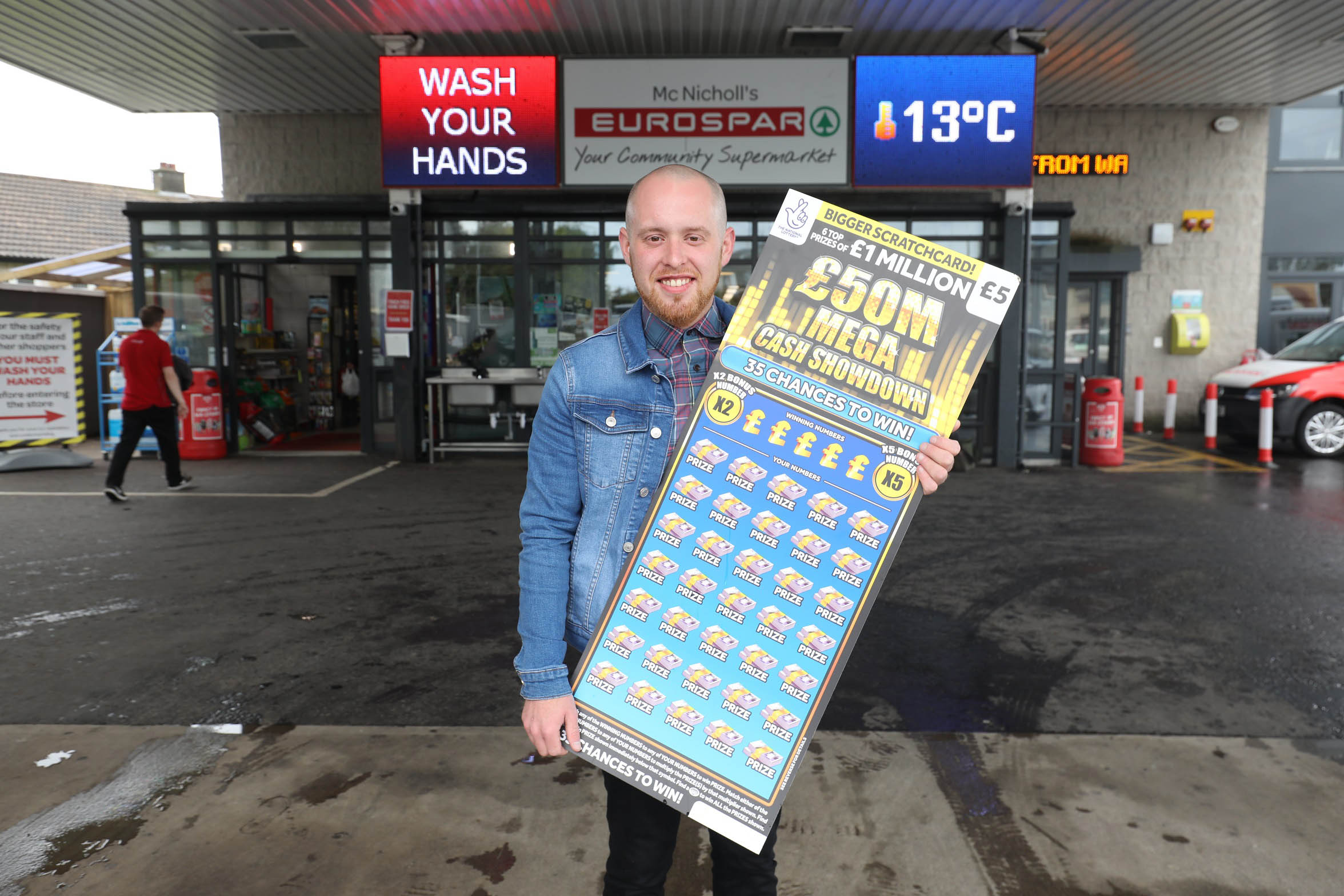 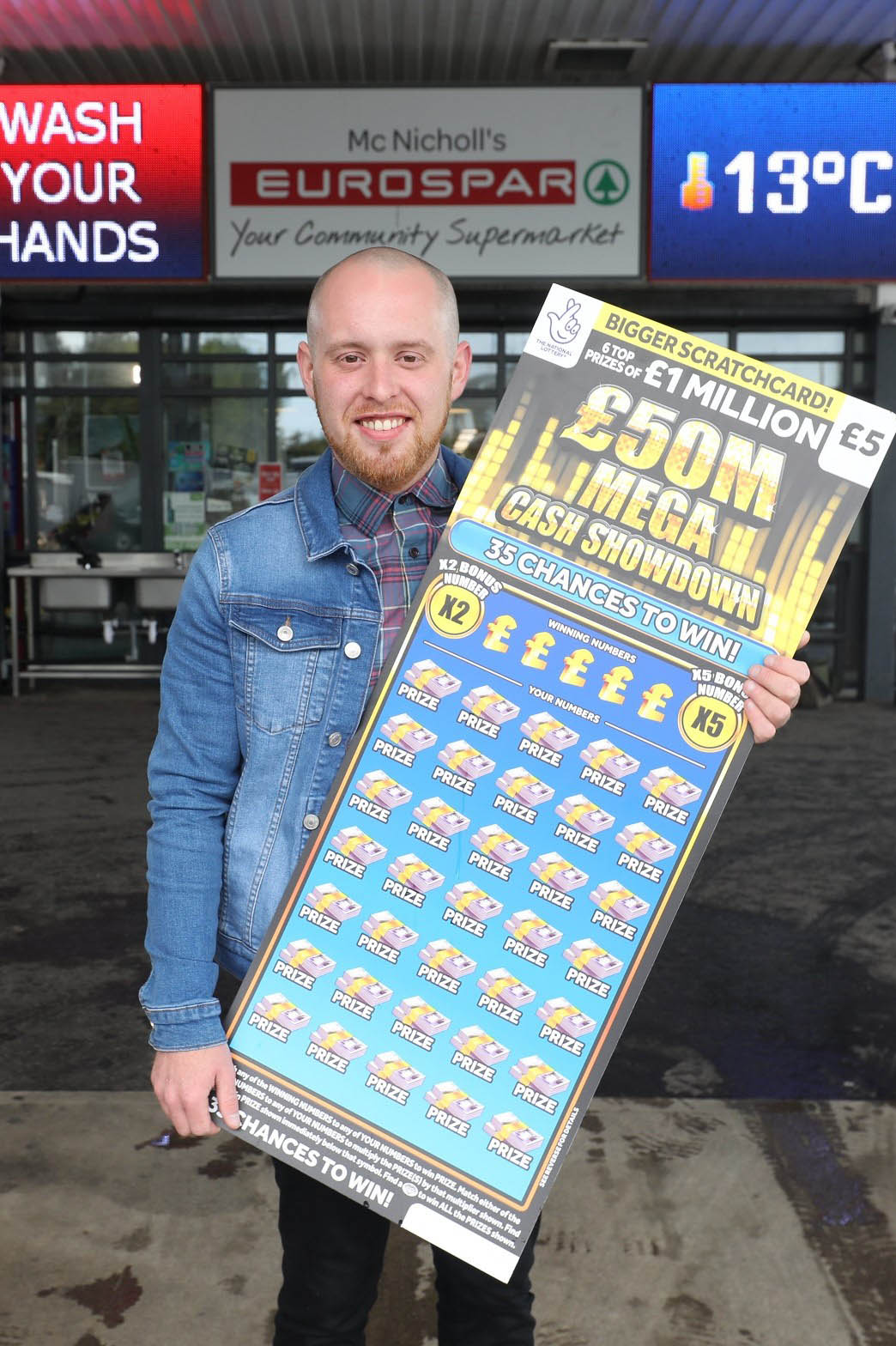 A store manager from Dungiven in County Derry~Londonderry is celebrating becoming Northern Ireland’s newest millionaire after scooping an incredible £1M on a National Lottery Scratchcard.

A finance graduate from Jordanstown, Shawn now has a few decisions to make on how to handle his new-found fortune after his Saturday night turned into something far beyond his wildest dreams.

“Normally I’d scratch them in the car but on this occasion, I took them home with me as I had to get ready to go to a socially distanced garden party with a few friends that night.  I actually forgot about the scratchcards in my jacket pocket so when I got home, I had a shower and got ready to go out.

“Then I remembered the cards, took them out of my jacket and started scratching around 7pm.  All of a sudden, I could see that my numbers matched and the card was telling me that I had won the top prize of one million pounds!

“I really couldn’t believe it,” he continued.  “At first I thought it must be a fake card and I checked every inch of it to make sure it was real.  Then I double checked all the numbers and they looked good too, so I gave the card to my mum and dad to have a look.

“They also checked it again and again and agreed that it looked like I’d won – but I still didn’t believe it.  Then I phoned the number for Camelot on the back of the card at about 7.30pm and ran through the details with a lovely lady on the end of the phone before she said the magic words… ‘Congratulations, you’ve won a million pounds’.

“I really couldn’t believe what I was hearing.  I was still trying to process what was happening while my mum was already making plans for a new asphalt driveway at the front of the house, which they’ve been working on.

“Then she phoned my brother Paul in England and I texted my brother Gavin in Australia – both of whom naturally thought we were joking,” he laughed.

Shawn was soon brought back down to earth when, having just become a millionaire, he received a phone call from the store assistant who had earlier sold him the winning scratchcard.

“The call came through and immediately I thought this was it – I’d been the victim of an elaborate prank,” said Shawn.

“But it turned out there was just a problem with the fridge in the shop so I had to go round and fix it, knowing that I’d literally just won a million.  That was around 8.30pm which meant I was running very late to meet my friends.

“When I arrived, my friends asked… ‘you’re late, what happened to you?’

“I replied ‘nothing much, I just won a million quid on a scratchcard’ and then the party really got under way!”

Despite his big win, Shawn will continue working at the store as he loves his job and has a ‘great relationship’ with the owners.  So what will he do with his winnings?

“The first thing I’ll do is fix up the front of my mum’s house – and get her a new driveway and a garden shed,” continued Shawn, “and I’ll give a little something to my mum, dad and three brothers, Gavin, Paul and Christopher.

“I also plan on buying myself a Range Rover and, depending on how travel restrictions go over the next while, I’d like to book myself a nice holiday somewhere.  Before the pandemic broke out, my friends and I were looking at a possible trip across the USA but, while that’s on the back-burner for now, it’s definitely in our future plans.

“Aside from that, I’m thinking of buying some property but I’ll take my time to think about it and talk to the financial and legal advisors that Camelot kindly provide,” he added.

Shawn said that the community has been very supportive since news started to leak about his big win.

“It’s been really nice as customers have been coming into the shop and saying that they’re delighted for me and that it couldn’t have happened to a nicer family,” he said.

“It’s crazy, because it’s only been a matter of weeks since I was chatting to customers about Robert Fullerton from Castledawson who won £300,000 on a scratchcard in May.

“We were just saying how amazing it would be to win that sort of money.  Now here I am, just two months later, having won a million quid. It just goes to show that anyone can win it at any time.

“I just feel lucky and blessed that on this occasion, it was my turn,” concluded Shawn.

Due to social distancing guidelines, Shawn is planning a bigger celebration when the time is right.

Thanks to National Lottery players, up to £600M is being used to support charities and organisations affected by the impact of the coronavirus outbreak across the arts, community and charity, heritage, education, environment and sport sectors. This includes up to £300M in funding support from the National Lottery Community Fund which will be used over the next six months to help groups best placed to support people and communities through the crisis – from helping support food banks to causes that combat loneliness and isolation, support for the elderly and projects that aid health in the community. By playing The National Lottery, an average of £30M is raised every week by National Lottery players for projects big and small across the country.