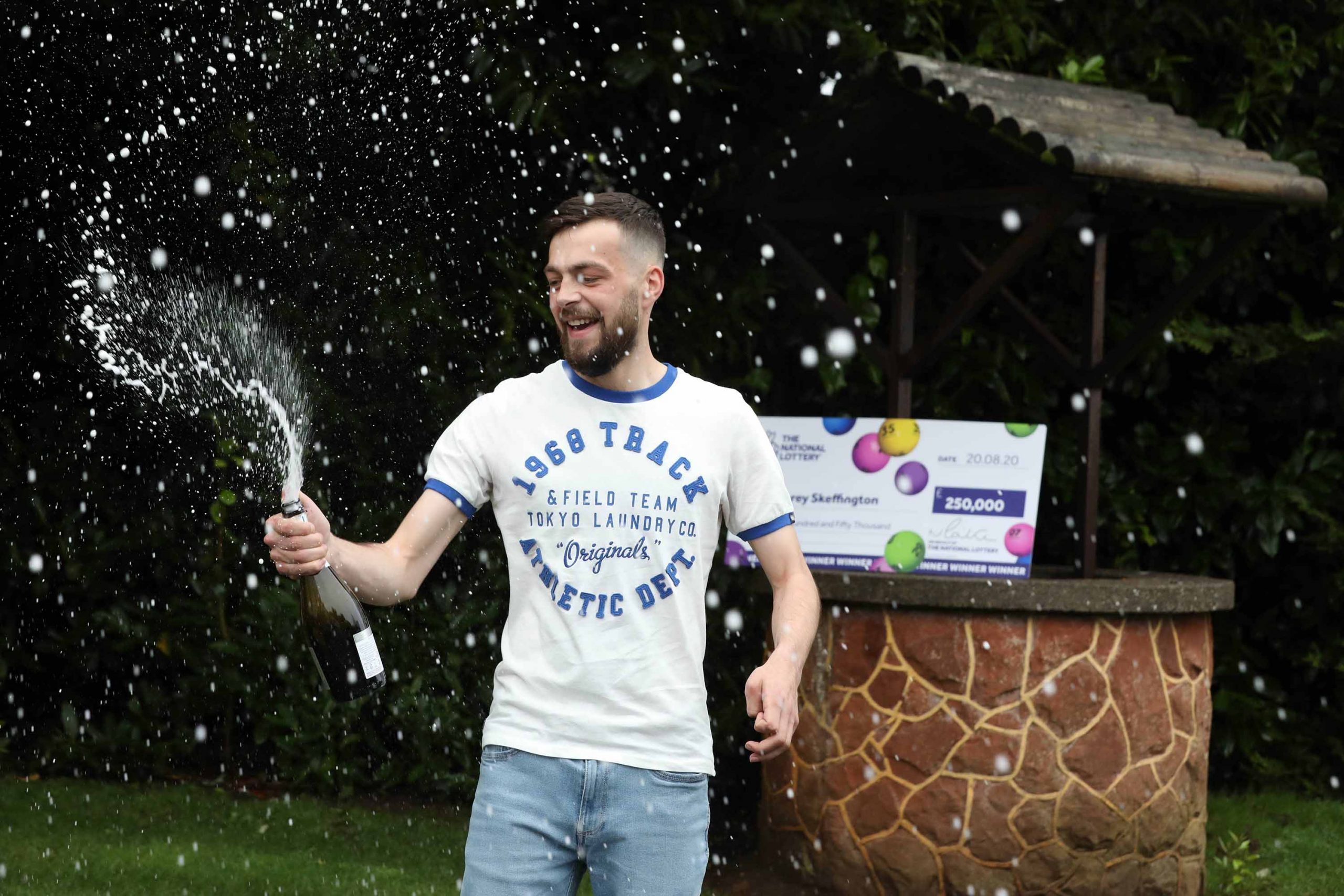 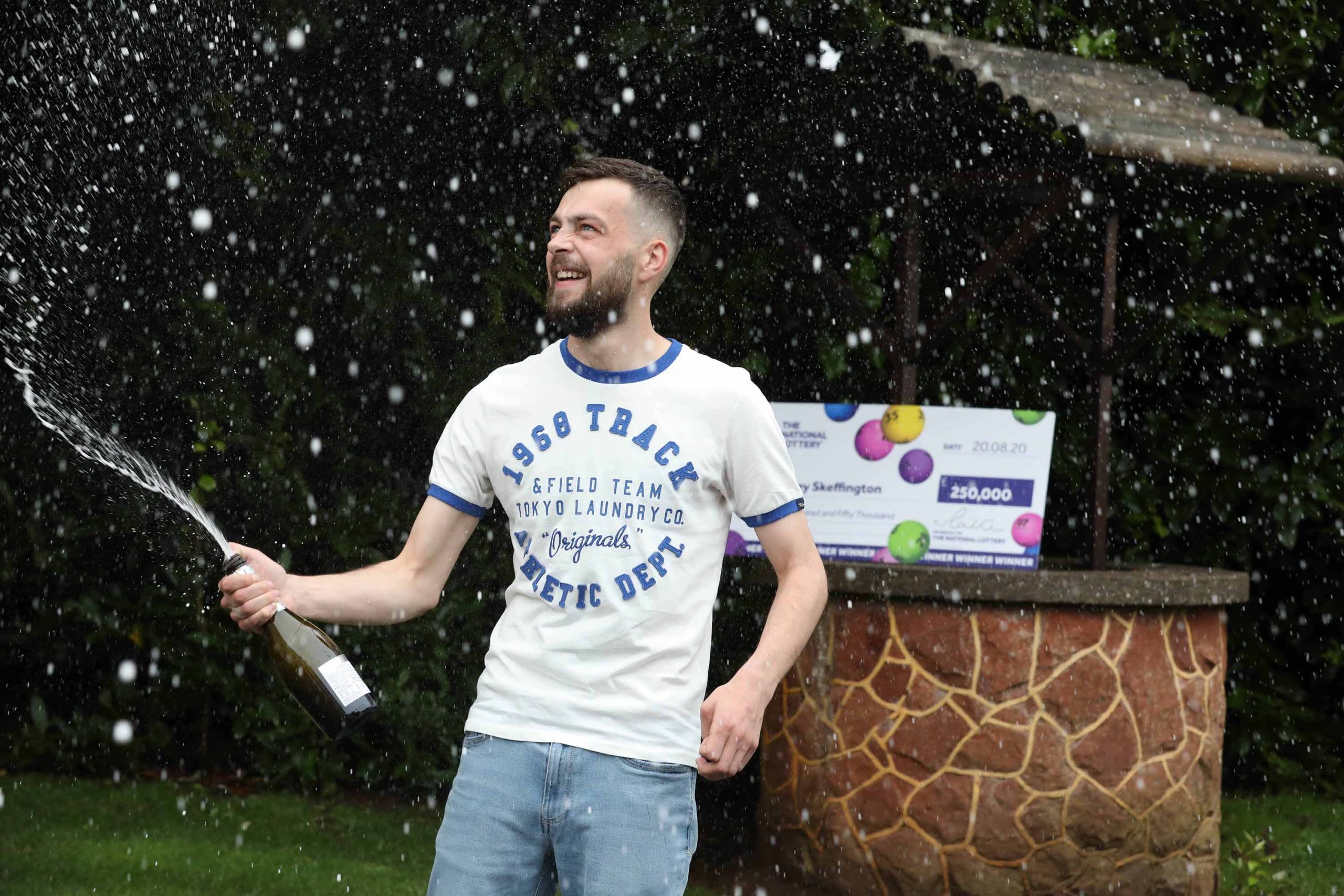 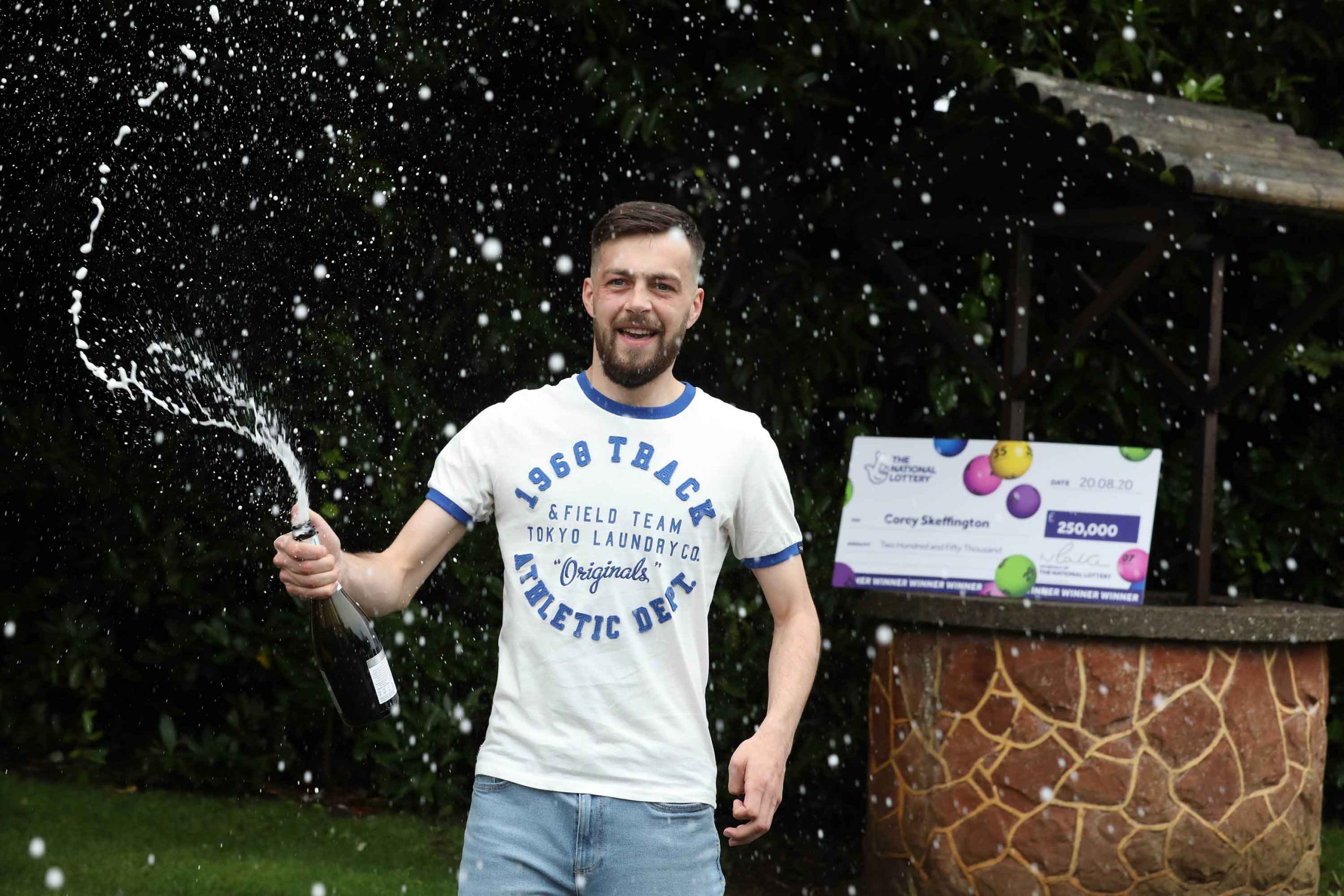 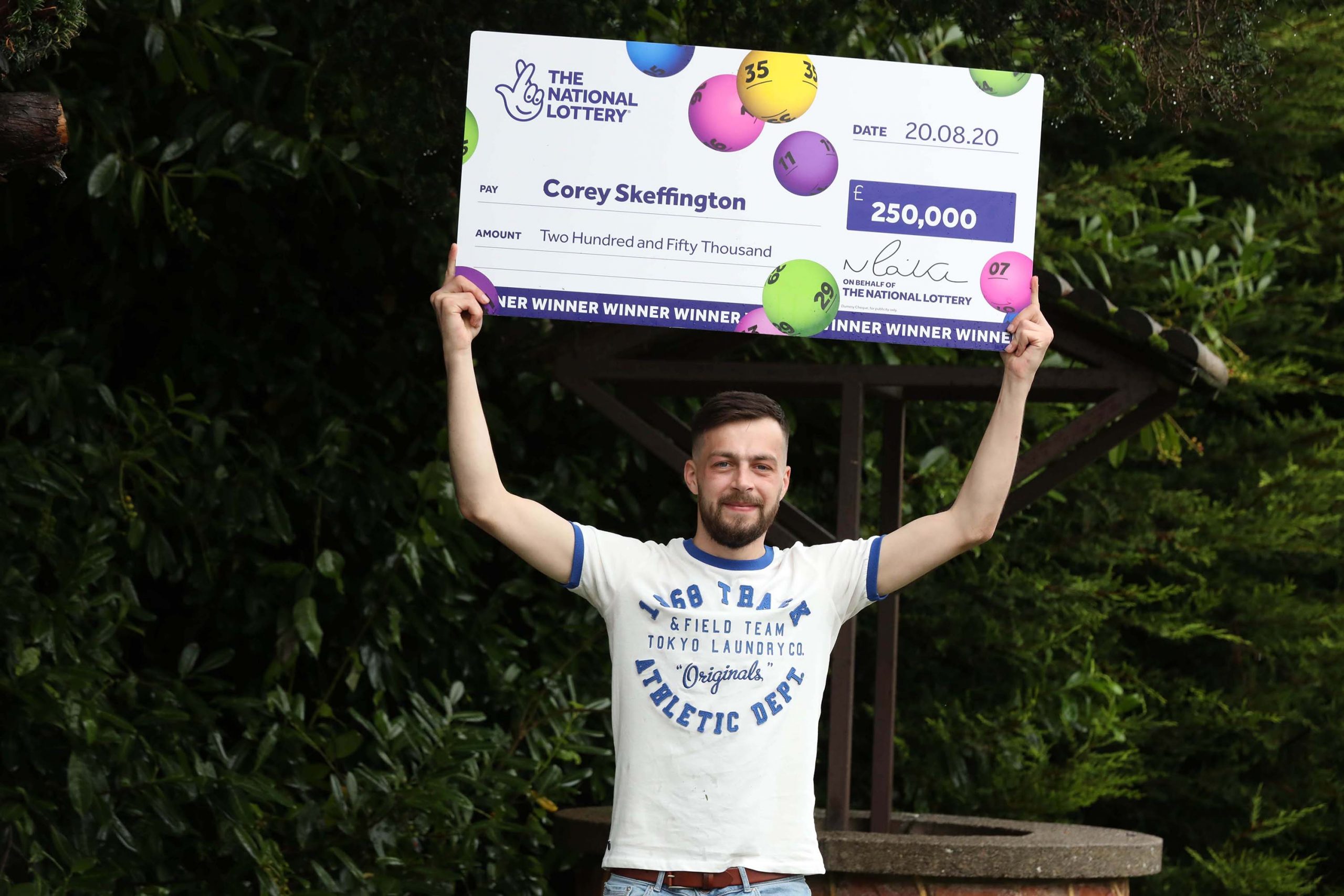 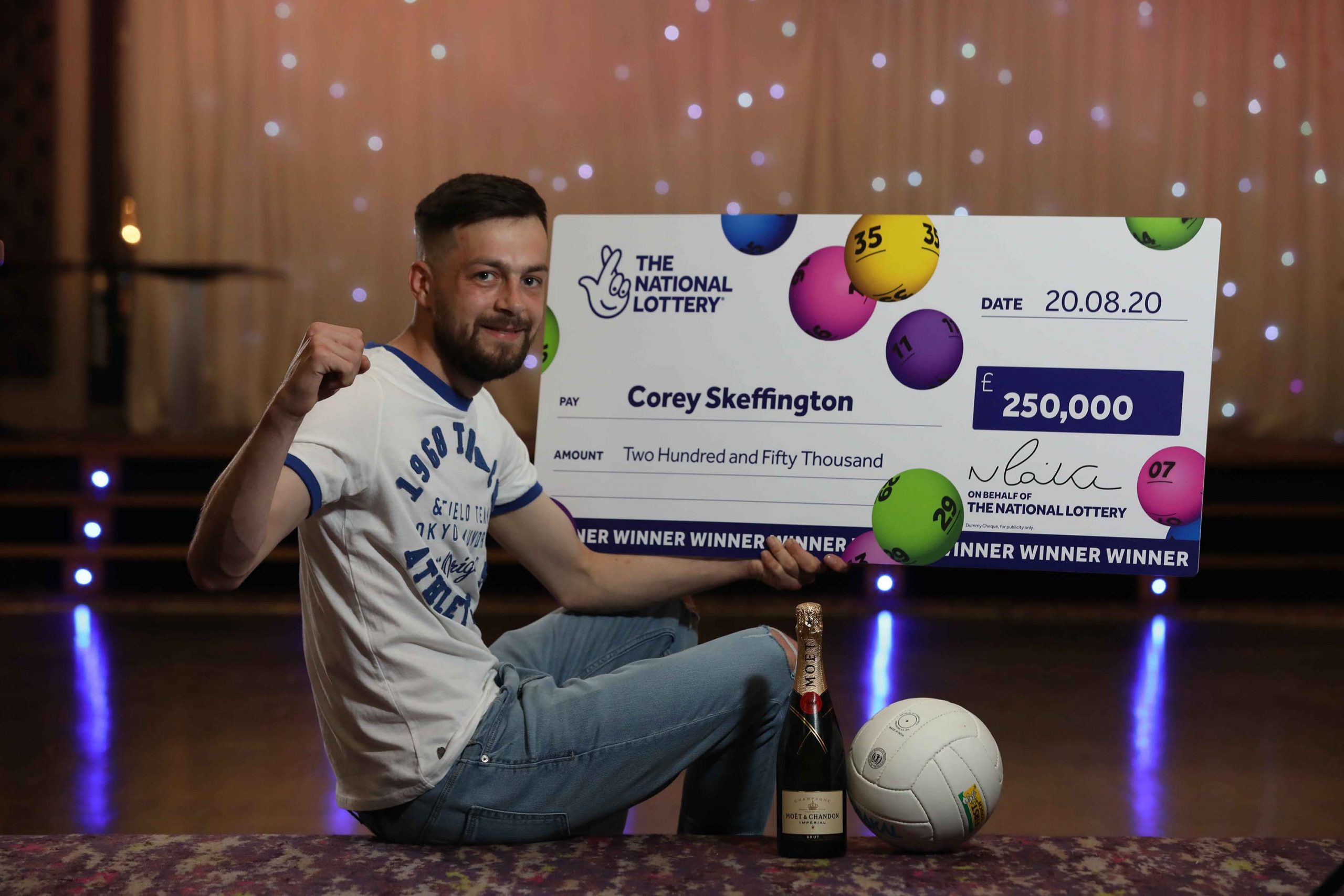 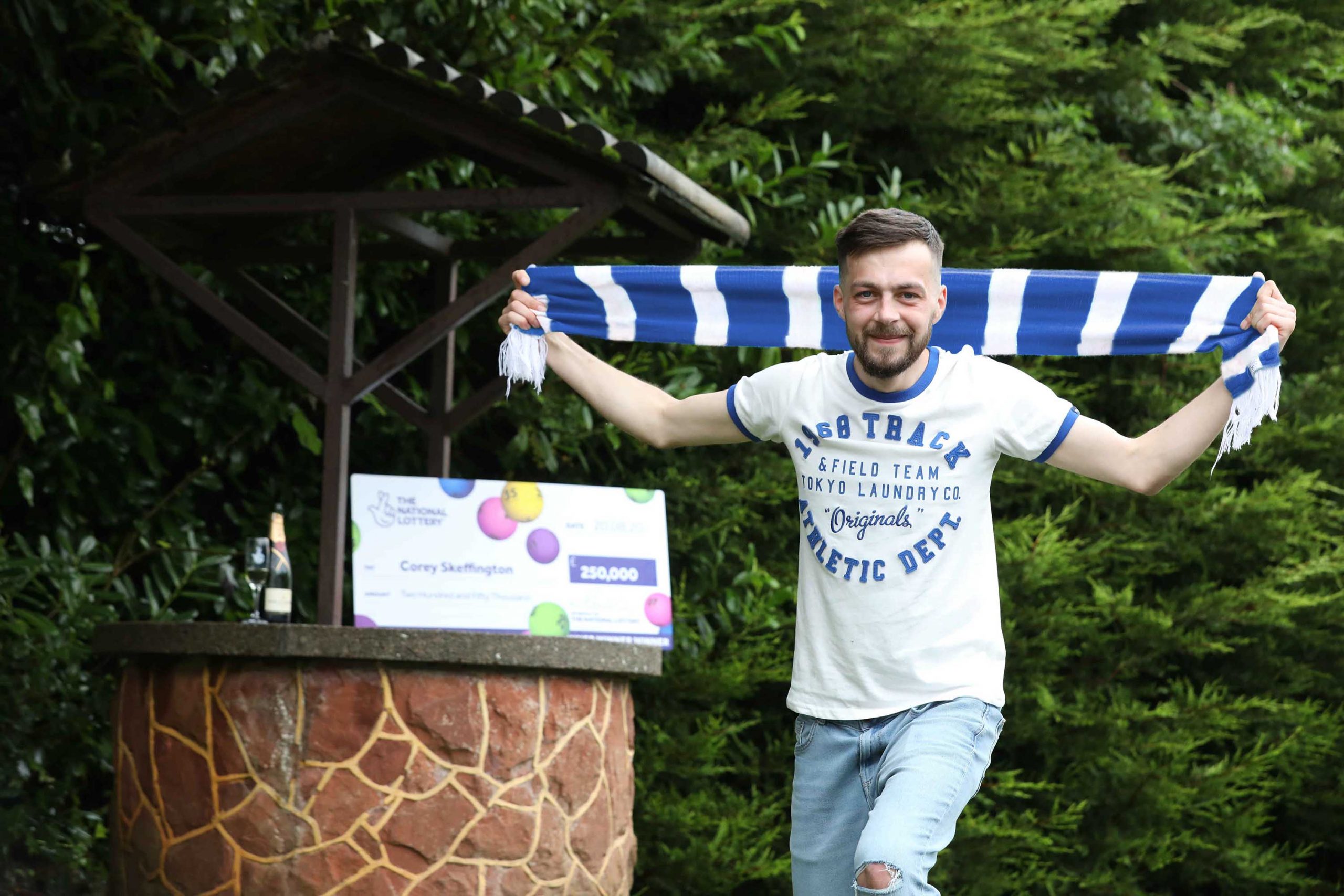 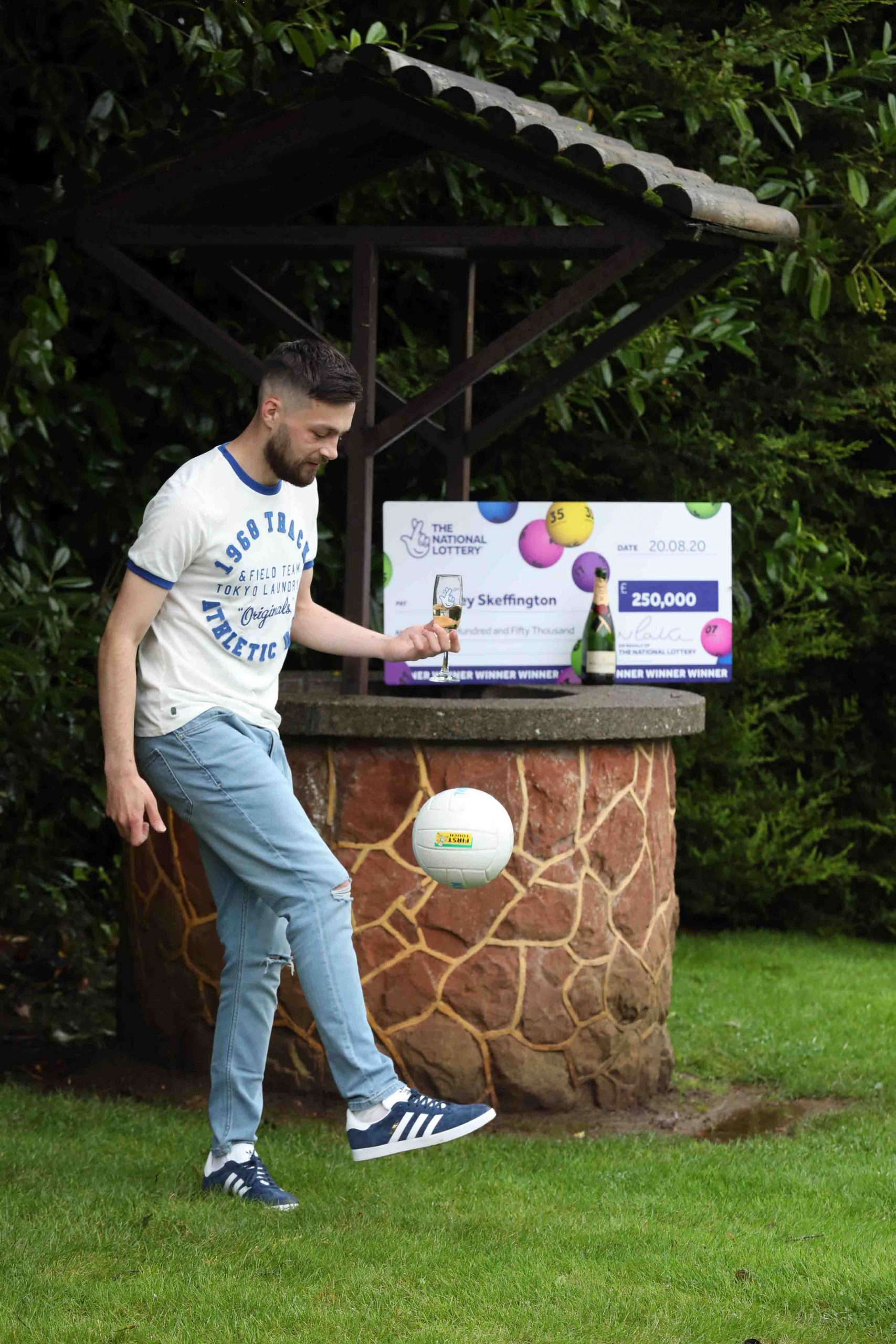 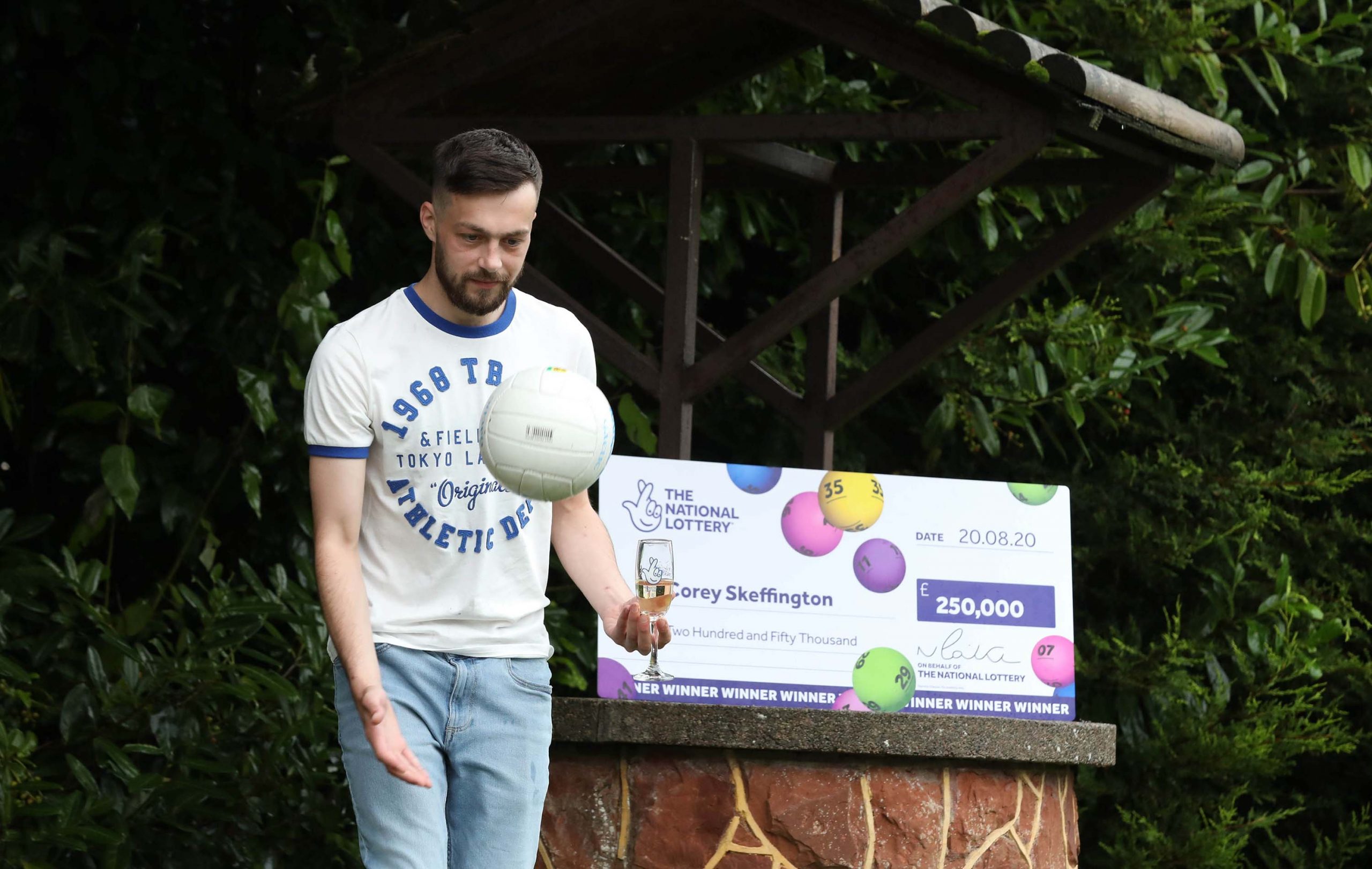 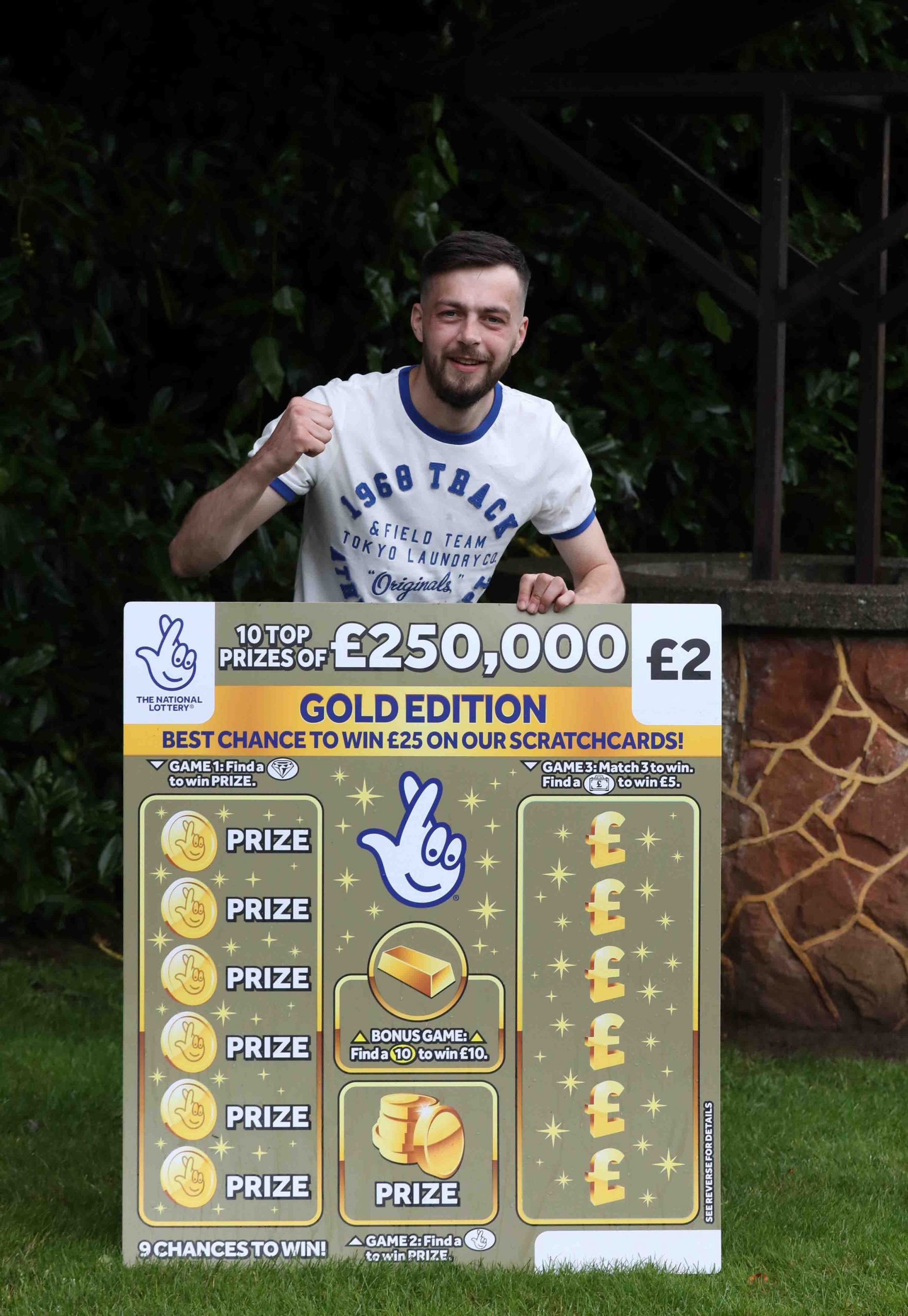 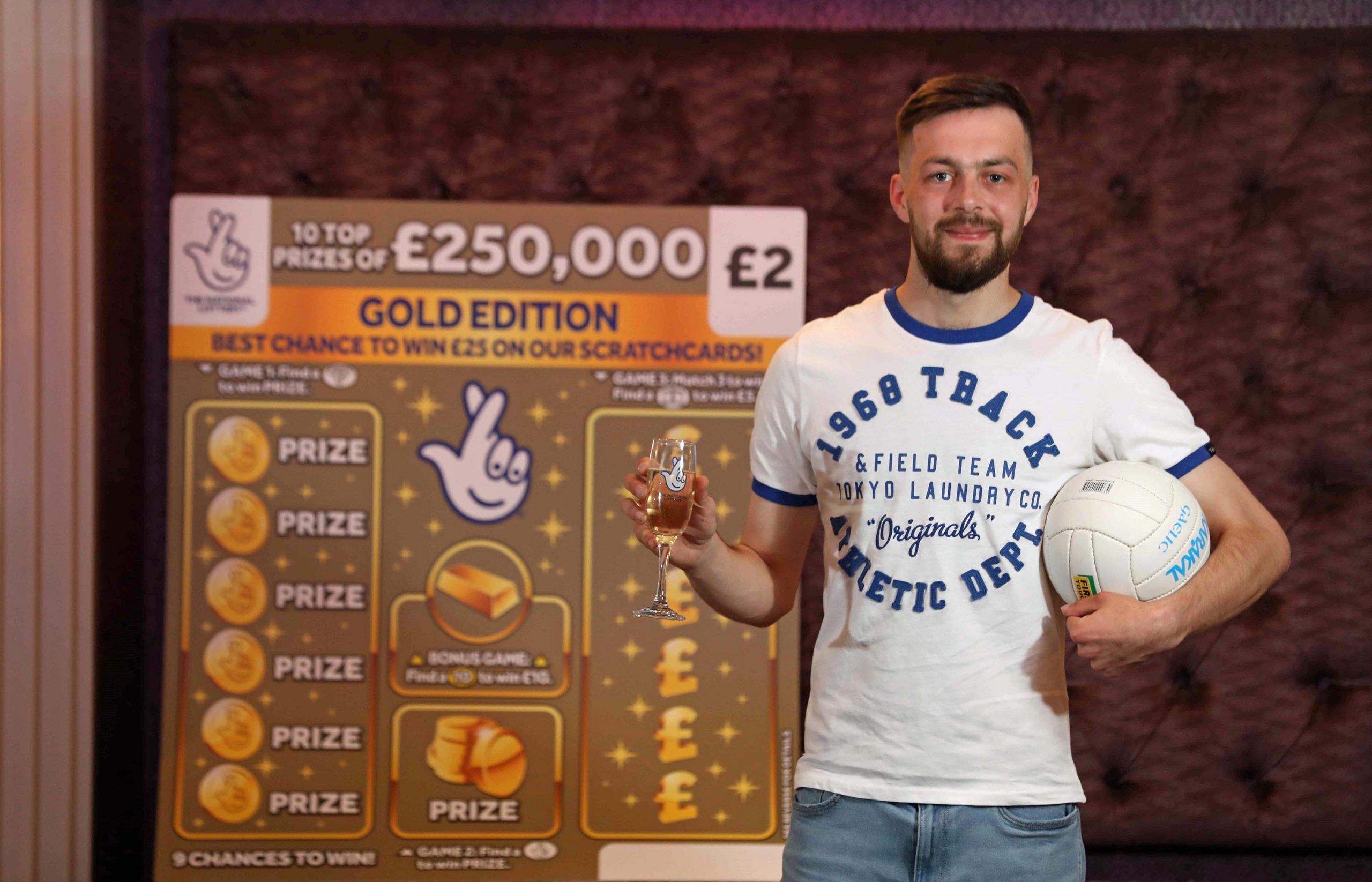 A young footballer from Coalisland in County Tyrone is celebrating his first big win of the season after scooping a whopping £250,000 on a National Lottery Scratchcard.

Now Corey, whose day job is as a machine operator at Knockloughrim Quarry in Magherafelt, has some concrete decisions to make on what to do with a rock-solid quarter of a million pounds!

Corey, who lives with his Aunt Edel and Grandmother Maura, is the third National Lottery publicity winner from Northern Ireland to strike it lucky in recent months as the region enjoys a lucky scratchcard streak!

Robert Fullerton from Castledawson won a massive £300k in May, while Shawn Keely from Dungiven became a millionaire overnight with an incredible £1M win in July.

Corey is delighted to be Northern Ireland’s latest National Lottery winner but is still trying to come to terms with his life-changing win.

“You dream of winning this sort of money but you never really think it’ll happen to you,” he explained. “I’m living proof that it can happen to anyone at any time.

“I would buy scratchcards occasionally, but the most I’d ever won was forty or fifty quid… until now!” he added.

Corey recalled the day his luck – and life – took a dramatic turn for the better.

“I was going round to a friend’s house for a chat, a beer and some food with a couple of mates and bought a scratchcard in the Mace store near his house” said Corey.

“We were sitting in the house while I casually scratched the card.  I had to find a diamond to win and, for some reason, I thought the card wasn’t a winner at first.  But then I saw the diamond!

“I genuinely couldn’t believe what I was seeing.  I didn’t say a word.  I just sat there staring at the scratchcard and I went as white as a sheet – so much so that my friends were asking what was wrong.  Without speaking, I showed them the card so they could see for themselves.

“Nobody could believe it!  A couple of the guys actually thought it was a prank with a fake card – but one guy knew that I’d bought it and confirmed that it was legit.

Corey continued: “So, after some socially-distanced cheering and jumping about, I called my aunt Edel to break the news and my mum who lives in Scotland.  I must admit that emotion got the better of me and I cried my eyes out as I told them what had happened.  They couldn’t believe it either.

“Then I went home after about an hour, called the number on the back of the scratchcard and confirmed everything with a lovely lady on the end of the phone at the National Lottery Line.”

Corey is still coming to terms with his change in fortune. He said:  “That night, I was so restless and I sat on the edge of the bed most of the night until I finally fell asleep. I woke up a couple of hours later wondering if it was all a dream and then checked where I had hidden the card and was delighted to see that it was still there.  It was like this for the next few days and I’m still trying to process it all.”

So what plans has Cory got for his newfound wealth?

“I certainly won’t be rushing into anything,” he said. “I want to spend it wisely, so I’ll probably buy a new car and invest in some property.  There are a couple of houses on the market that I have my eye on.

“I’d also like to go on holiday when it’s safe to do so and, as a big Manchester United fan, a trip or two to Old Trafford will hopefully be on the cards when sporting events are open to the public again.

“The new PlayStation 5 will be out soon so I’ll buy one of those as well and a few games to keep me going,” continued Corey.

“In the meantime, I’ll not do anything too hasty and make sure to sort my family out with a little something.  I still can’t believe that I’ve won but it’s a brilliant feeling and I’m very thankful.”

Thanks to National Lottery players, up to £600M is being used to support charities and organisations affected by the impact of the coronavirus outbreak across the arts, community and charity, heritage, education, environment and sport sectors. This includes up to £300M in funding support from the National Lottery Community Fund which is being used over the next six months to help groups best placed to support people and communities through the crisis – from helping support food banks to causes that combat loneliness and isolation, support for the elderly and projects that aid health in the community. By playing The National Lottery, an average of £30M is raised every week by National Lottery players for projects big and small across the country.