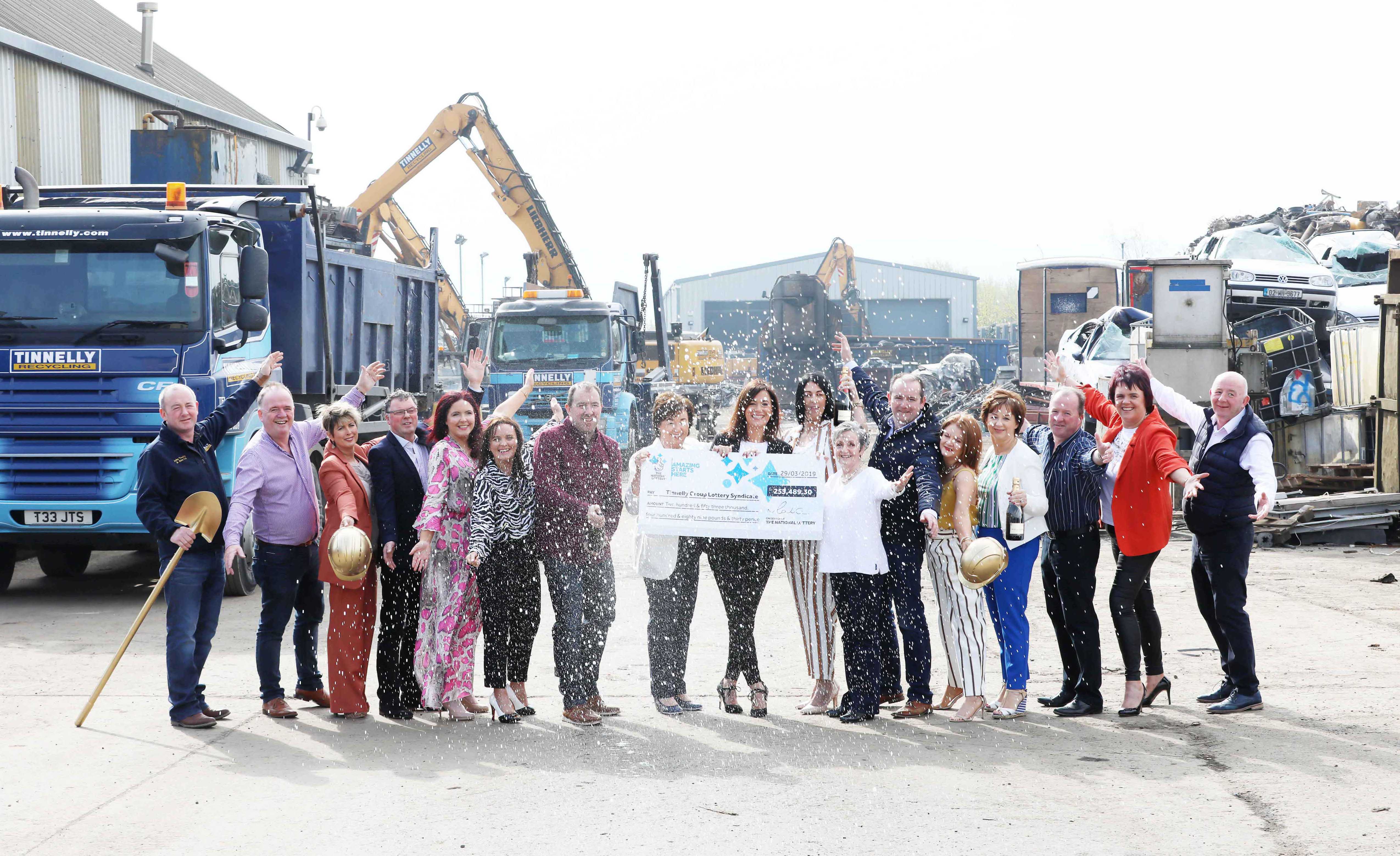 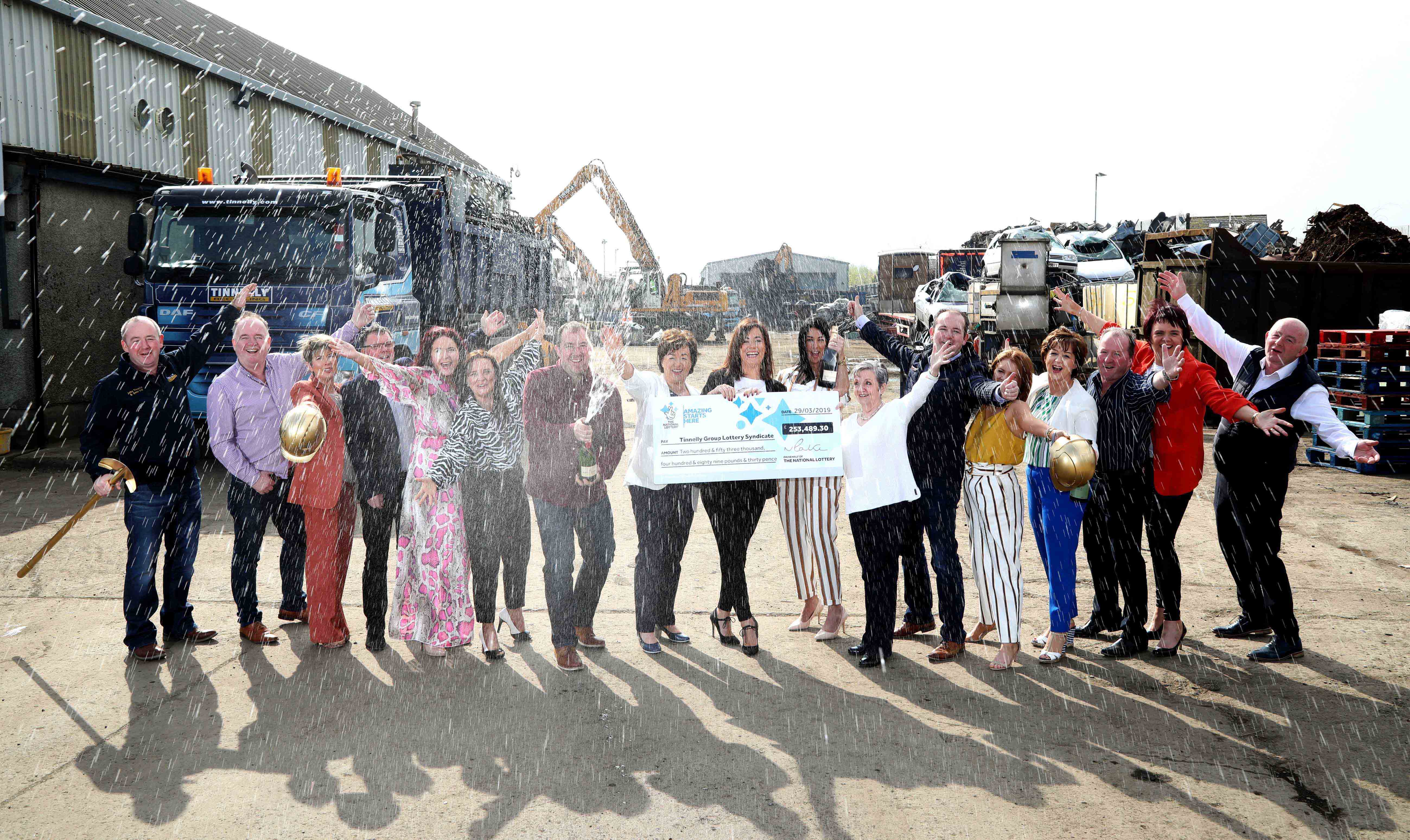 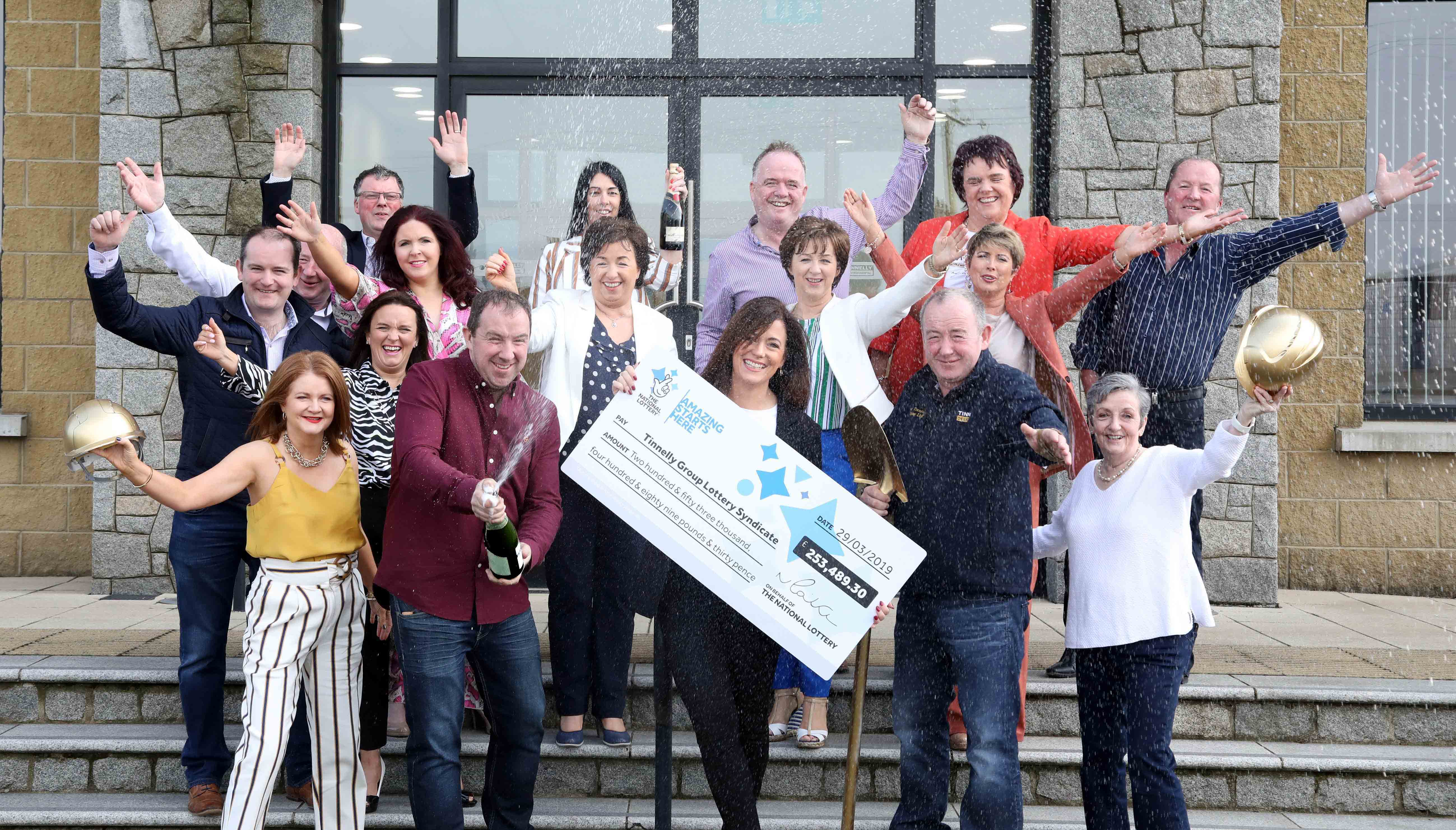 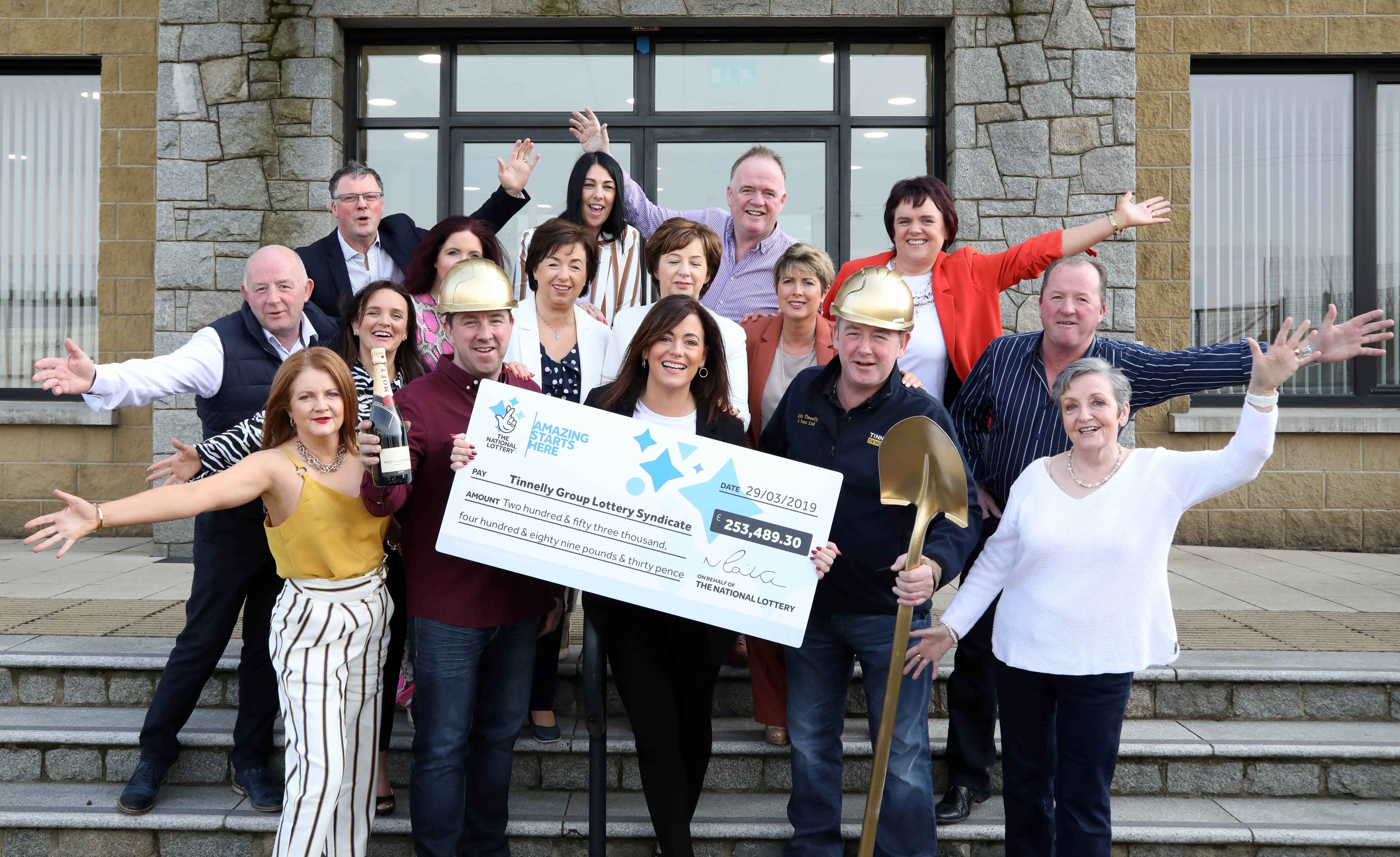 An 18-strong work syndicate from Newry-based demolition company Tinnelly Group Ltd are having a ‘smashing’ time after ‘striking’ it lucky with a quarter of a million pound EuroMillions win.

The County Down employees scooped a massive £253,489.30 after matching the five main numbers and one Lucky Star number in the EuroMillions draw on Friday 29 March, with each member of the Tinnelly Group Lottery Syndicate pocketing more than £14,000.

Fate seems to have played a big part in Northern Ireland’s latest National Lottery win – at the start of every month, syndicate manager Michelle O’Hare from Warrenpoint usually buys the EuroMillions Lucky Dip lines for the syndicate for the entire month’s Friday night draws but this time there was a change to the routine.

Michelle was at a wedding on 29 March and so instead of buying from her local shop as always, she asked Gareth Tinnelly, a member of the family that owns the business and who is also in the syndicate, to purchase the tickets in her place – which he did at Mulkerns Eurospar on the Forkhill Road, close to company HQ. The rest, as they say, is history.

The winning ticket lay on Gareth’s desk for a week before Michelle had a chance to check it when she called into her local store the following Friday.

“I asked the shop assistant to check my tickets as I normally do,” explained Michelle, “but this timehe gave a ticket back to me and said that I would need to call The National Lottery as this ticket was for a big amount.

“Excitedly, I used my phone app to scan the ticket and I literally could not believe my eyes when the figure flashed up on my screen. I really couldn’t believe it and asked a few friends and family to check that I wasn’t seeing things.

“Then when I was sure that it was correct, I called The National Lottery who happily confirmed that our ticket was indeed worth just over a quarter of a million pounds.  We also won a further £2.70 on the same draw!”

Having confirmed the win, Michelle then thought about how she was going to break the news to her fellow syndicate members – so she and her colleague Gareth came up with a very clever plan.

“I wasn’t sure how to break the good news to the rest of the team so Gareth and I had a chat on Saturday and we came up with a plan to carry out on Monday morning at work.  It was very difficult to keep it a secret over the weekend and I couldn’t sleep a wink but, for the first time in forever, I was looking forward to getting up early to go to work on a Monday,” laughed Michelle.

“We told everyone that we’d forgotten to buy the lottery tickets over the weekend but had done a bet in Saturday’s Grand National instead.  Then we gave everyone an envelope and explained that the person whose envelope contained the name of the winning horse would win £500.  In reality, I had placed a note in every envelope to say they had won £14,000.

“As everyone started opening their envelopes, they soon realised what had happened and it wasn’t long before everyone was jumping around, hugging each other, cheering and crying for joy.  It was a brilliant moment that I’m sure none of us will ever forget.

“Then the boss said that we could all go to the bar for the afternoon to celebrate.  We really had a smashing time – although there were a few sore heads at work next morning!”

Although the most that Michelle had ever won personally was ‘a mug in P7’, she has always been convinced that she would win big on The National Lottery.

“I don’t know why but I’ve always had a feeling that I would win big one day,” said Michelle.  “In fact, I’ve always said to my syndicate colleagues that I would pay them big money someday.  Now it’s just amazing that I can say ‘I told you so’.”

Now Michelle, who has just returned from a holiday in Thailand, is planning to use her winnings to book a second holiday in the sun later in the year.

“I would never go on two holidays in one year,” she said, “but winning this money now allows us to do that with plenty to spare.”

Holidays are high up on the wish list for many of Michelle’s fellow syndicate members, including Alison McCann who has booked a family holiday in New York and is also planning a 25thwedding anniversary cruise.

Gareth Tinnelly will be booking a ‘special family holiday’ while Anne Rogers is also planning a family holiday – and treating herself to a nice shopping trip!

“In my last job we never won anything,” said Anne, “but I’m here just two years and I cannot believe this!”

Michelle added: “We may not all have become overnight millionaires but this win has brought a big ray of sunshine into all of our lives. I’m sure we’ll all use our money to do different things but it’s a really lovely feeling to share with so many good friends and colleagues.

“You just never know what’s around the corner and we’re living proof that good fortune can strike anywhere at any time.  Now we’re looking forward to our next big win – I have a feeling that this won’t be our last!” concluded Michelle.

Since 1994, The National Lottery has been changing the lives of winners and communities across the UK with players raising, on average, around £30M for National Lottery funded projects every week.

In Northern Ireland alone there has been more than £1.2 billion awarded in National Lottery grants to more than 25,000 individuals, organisations and projects across the arts, sports, heritage, health, education, environment, charity and voluntary sectors.

Based in Newry, Tinnelly Group Ltd was established in 1959 by John Tinnelly Snr and is still wholly owned and managed by the Tinnelly family. With four generations of experience, the company are specialists in demolition and dismantling, asbestos removal, facade retention, metal recycling and architectural salvage.