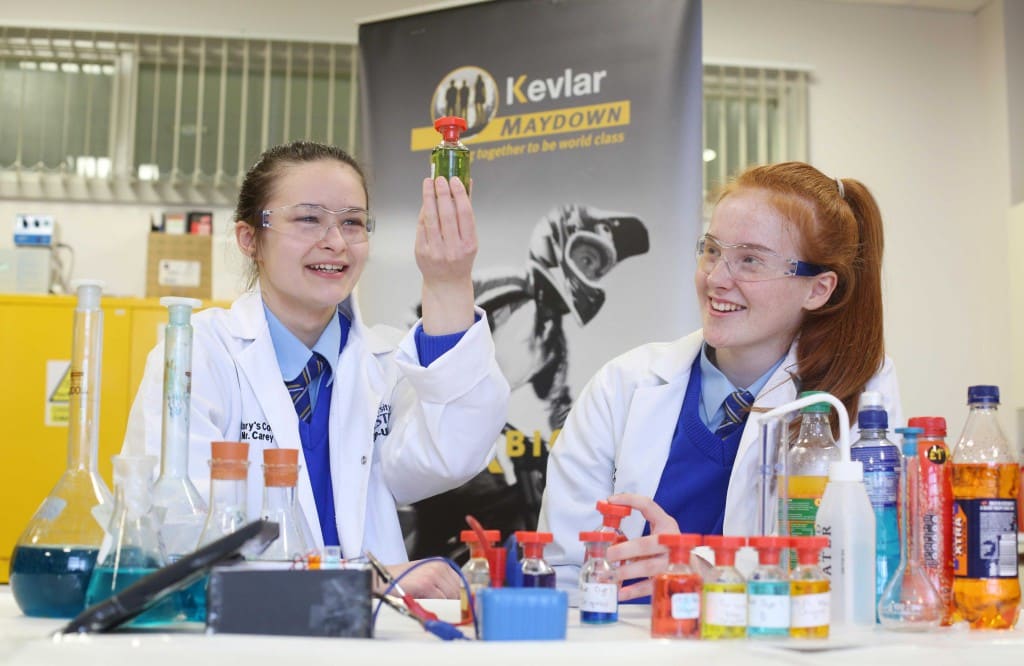 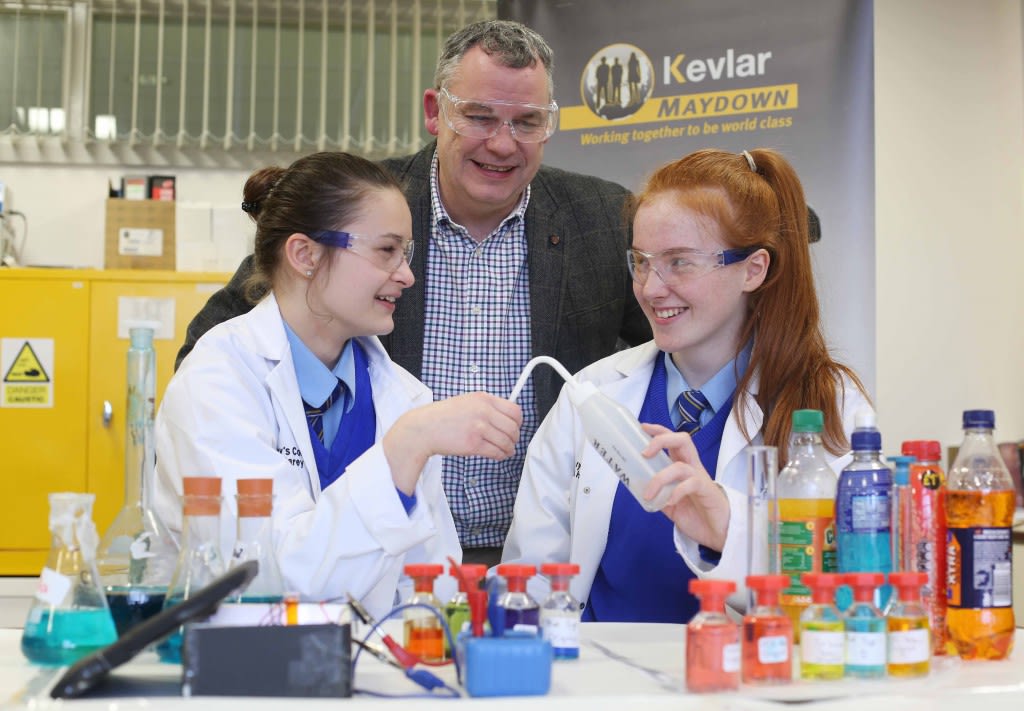 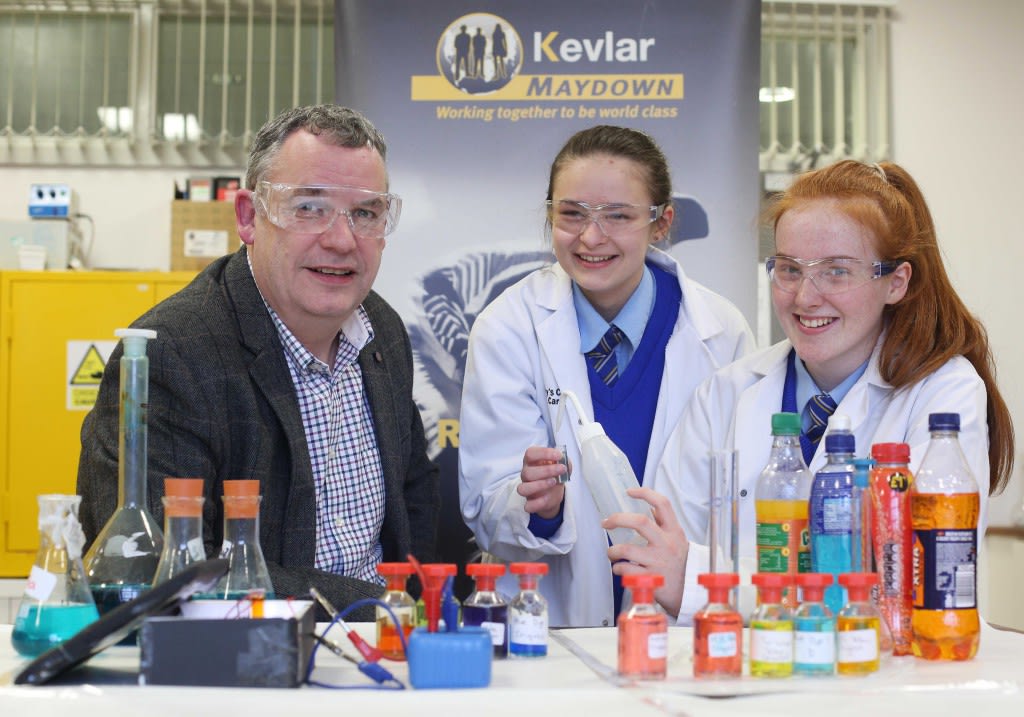 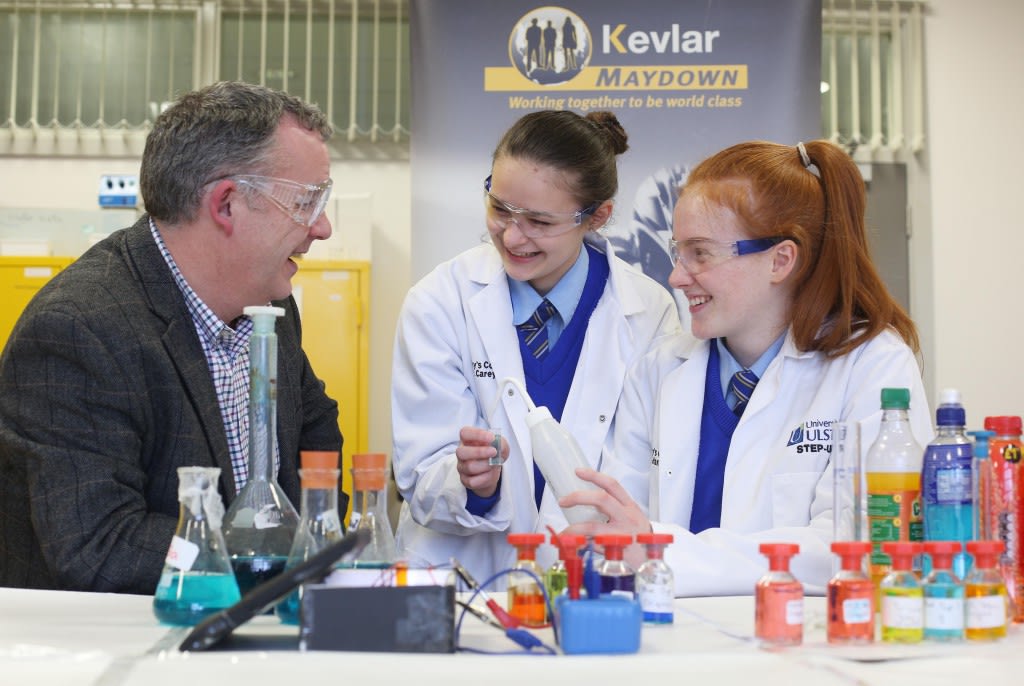 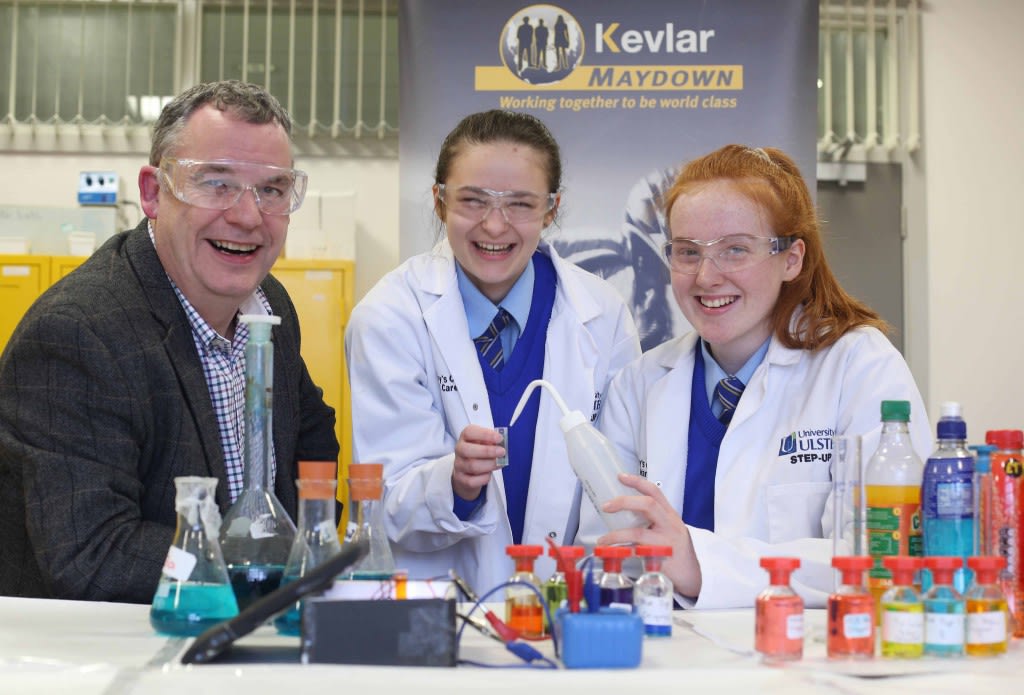 DERRY ~ LONDONDERRY DuPont is continuing its commitment to the next generation of NI scientists and engineers by supporting two pupils from St Mary’s College in Derry as they travel to Birmingham for a nationwide science and engineering competition.

Maeve Stillman (Year 11) and Ava Canney (Year 10) have been shortlisted as finalists in the Big Bang UK Young Scientists & Engineers Fair and will travel to Birmingham to exhibit their science projects at The National Exhibition Centre (NEC) from March 14 – 17.

The Big Bang Fair is an exhibition which focuses on science, technology, engineering and maths (STEM) in the UK and is intended to inspire 7 – 19-year olds to engage with STEM subjects through a mixture of exhibits, interactive workshops, theatre shows, and activity stands. The fair hosts national competitions which invite young people from across the UK to compete for the title of UK Young Scientist of the Year and UK Young Engineer of the Year.

DuPont, a world leader in science and engineering, and creator of Kevlar®, has a strong interest in encouraging young people to get involved in STEM subjects, as DuPont Organisation Manager Paul Kirkpatrick explained:

“Getting young people interested in science and engineering from a young age is vital if we are to inspire them to pursue a career in this field, and for this reason we are always keen to help the next generation of scientists and engineers in any way we can.

“To be shortlisted for a competition such as this is a fantastic achievement and really helps to widen young people’s horizons and engage them with STEM in a fun and exciting way. We’re proud to be supporting Maeve and Ava at The Big Bang UK Young Scientists & Engineers Fair and I would like to take this opportunity to wish them every success!”

Both pupils from St. Mary’s College in Derry will face off next month amongst the best and brightest young minds the UK has to offer as they compete to be named UK Young Scientist of the Year.

Despite the stiff competition Maeve and Ava both have plenty of experience showcasing their scientific discoveries with Maeve recently being crowned NI Young Scientist of the Year and Ava finishing runner-up.

Speaking ahead of the competition, the pupils discussed the details of their projects. Ava said:

“For my project I am investigating the amount of synthetic dyes in various foods and drinks using a homemade spectrophotometer, as researchers have shown in the past that there is a link between these synthetic dyes and ADHD and hyperactivity in children.

“This project has given me a huge insight into how chemistry is a major part of our everyday lives. I thoroughly enjoy taking part in these competitions and I am always learning new things each day,” she added.

“I am growing SCOBY, which stands for symbiotic culture of bacteria and yeast. This produces a cellulose material when grown. With this material I am investigating its hydrophilic properties and how to make it waterproof.

“I work on this project every Wednesday after school in the Chemistry Club which gives me amazing opportunities to explore my scientific questions in a supportive atmosphere.”

DuPont (NYSE: DD) has been bringing world-class science and engineering to the global marketplace in the form of innovative products, materials, and services since 1802.  The company believes that by collaborating with customers, governments, NGOs, and thought leaders we can help find solutions to such global challenges as providing enough healthy food for people everywhere, decreasing dependence on fossil fuels, and protecting life and the environment.  For additional information about DuPont and its commitment to inclusive innovation, please visit http://www.dupont.com.

In 1957, DuPont UK Ltd announced plans to build a neoprene plant on a former naval airfield at Maydown, seven miles from Derry~Londonderry, Northern Ireland. Construction started that same year. Since it began operations, in addition to neoprene, Maydown manufactured Orlon® (from 1968) Lycra® (from 1969) and Hypalon®. These products have subsequently ceased production or, in the case of Lycra®, transferred ownership.  DuPont now produces Kevlar®.

On land – Architects, engineers, and builders incorporate cables of Kevlar® into light suspension bridges because Kevlar® is stronger and lighter than steel on an equal-weight basis, and does not corrode. Cables made of Kevlar® help enable elevators to use smaller pulleys than they would have to use for steel cables, and subsequently require less energy and space to operate. Additionally, it is possible to have longer cable lengths because of the lightweight, high-strength properties.

In space – Kevlar® fibre has proven that it is strong enough to survive the extreme forces and temperature fluctuations of space travel. When the Mars Pathfinder landed on the surface of Mars, ropes made of Kevlar® helped secure the inflated landing cushions (which were themselves reinforced with Kevlar® fibre) that allowed it to complete its 40-million-mile journey fully intact and ready to explore the planet. Kevlar® is also used in the space shuttle to help protect against impacts from orbital debris.