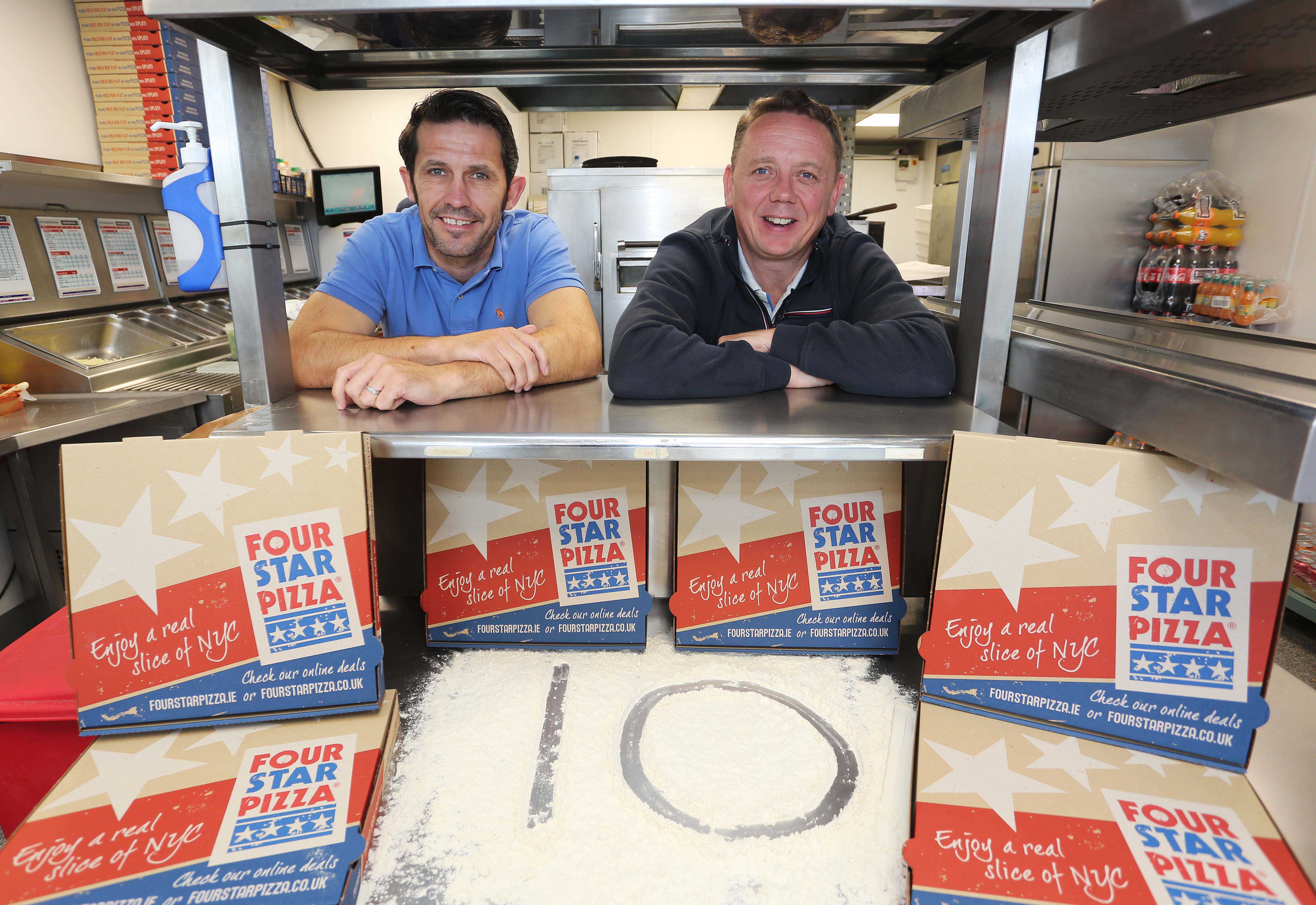 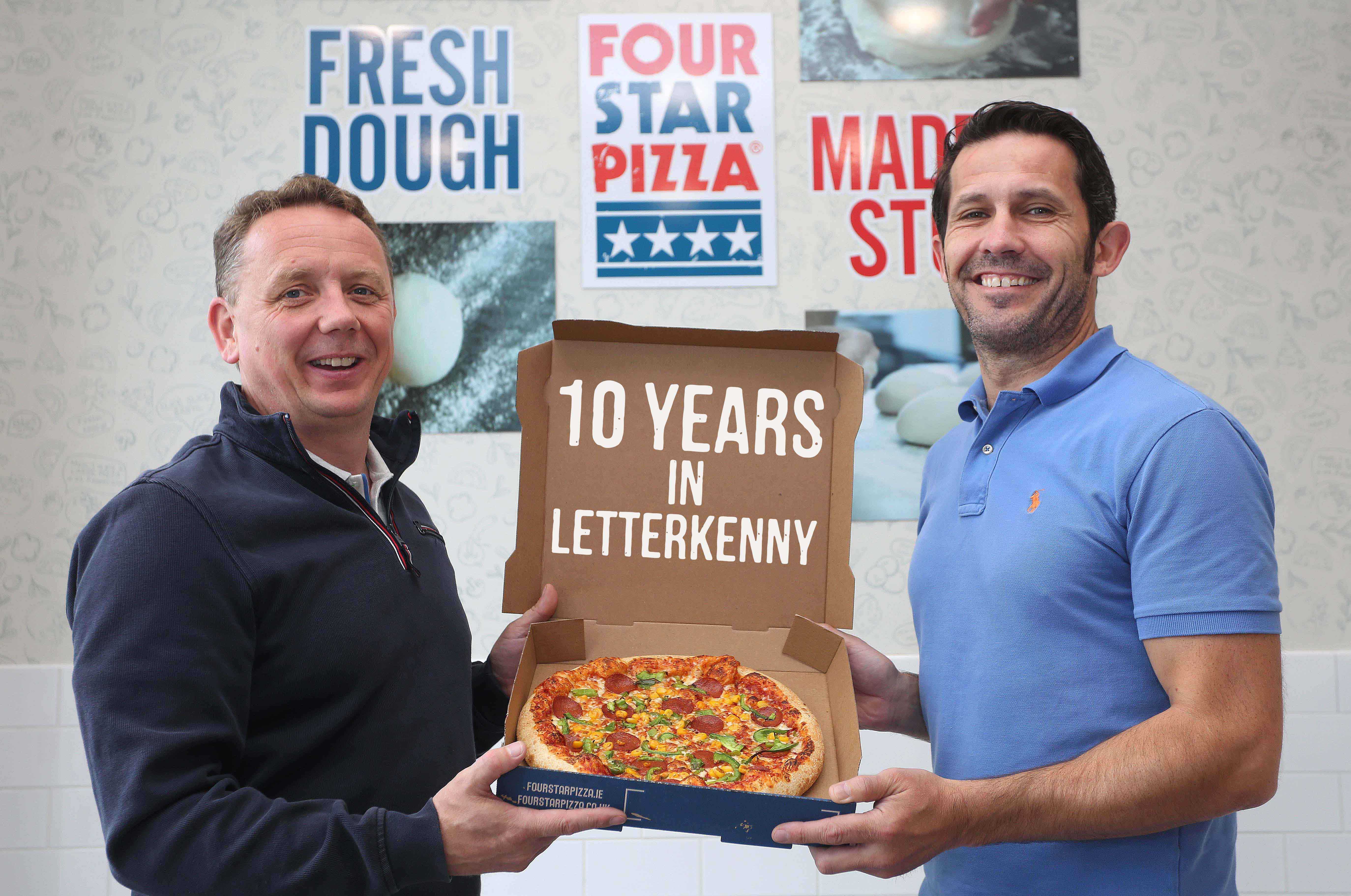 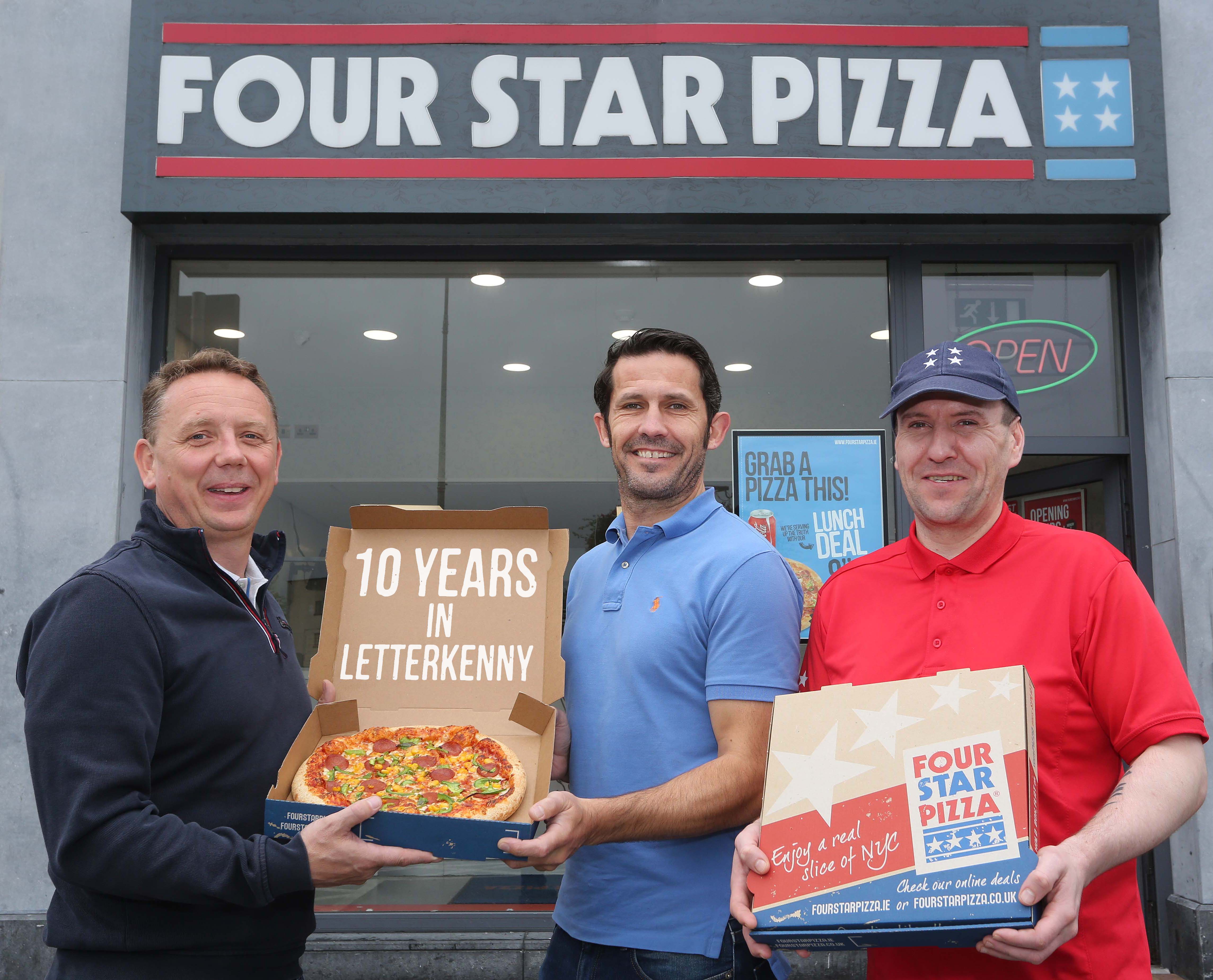 PIZZA lovers in Letterkenny will be joining in the party this week as the town’s popular Four Star Pizza restaurant celebrates its 10th birthday.

The store officially opened its door at Station Roundabout in Letterkenny on September 5th 2009 as part of a €150,000 investment which has created 10 jobs in the area. Since then, it has delivered more than 1.8 MILLION FRESH PIZZAS to homes in the Letterkenny area, using over TWENTY MILLION pepperoni slices, 210 TONNES of cheese and 380 TONNES of flour.

Managing Directors Ciaran Bradley and Teague Whoriskey, who also own Four Star Pizza locations at Drumahoe and the Da Vinci Complex in Derry, welcomed the significant milestone, with Ciaran saying:

“I still can’t believe it’s been 10 years since we first opened in Letterkenny, it’s been amazing to watch how the store has grown since then. I’d like to take the opportunity to say a massive thank you to all of our customers for the phenomenal support they’ve given us, as well as thanking our hard-working team for making the store the success it is – I can’t wait to see where we’ll be in another 10 years!”

As the largest Irish-owned pizza chain on the island of Ireland, Four Star Pizza has grown from strength in recent years, delivering a record year in 2018, with a 31% rise in online sales driving revenue growth of 8%. In that time the company also invested over €1 million into the brand which saw the creation of more than 100 new jobs and the opening of six new stores across the island of Ireland.

However, when it comes to the secret of Four Star Pizza’s success in Letterkenny, Managing Director Teague Whoriskey believes it’s ‘all about the base’:

“What surprises a lot of our customers is that we actually make our own dough, fresh in store, each and every single day. We get our two main ingredients from Neill’s flour as well as locally produced rapeseed oil. This is what makes the difference between us and our competitors when it comes down to the taste test” explained Teague.

“To say thank you to our customers for all their amazing support over the last 10 years, we will be running a special promotion on Thursday September 5th whereby customers can pick themselves up two medium pizzas for only €10 while stocks last!” he added.

Four Star Pizza is a wholly Irish-owned Pizza chain, established in 1986, and employs more than 1,000 people on the island of Ireland across its 56stores – including 14 in Northern Ireland.