Ha-waiian earth would you put pineapple on your pizza? 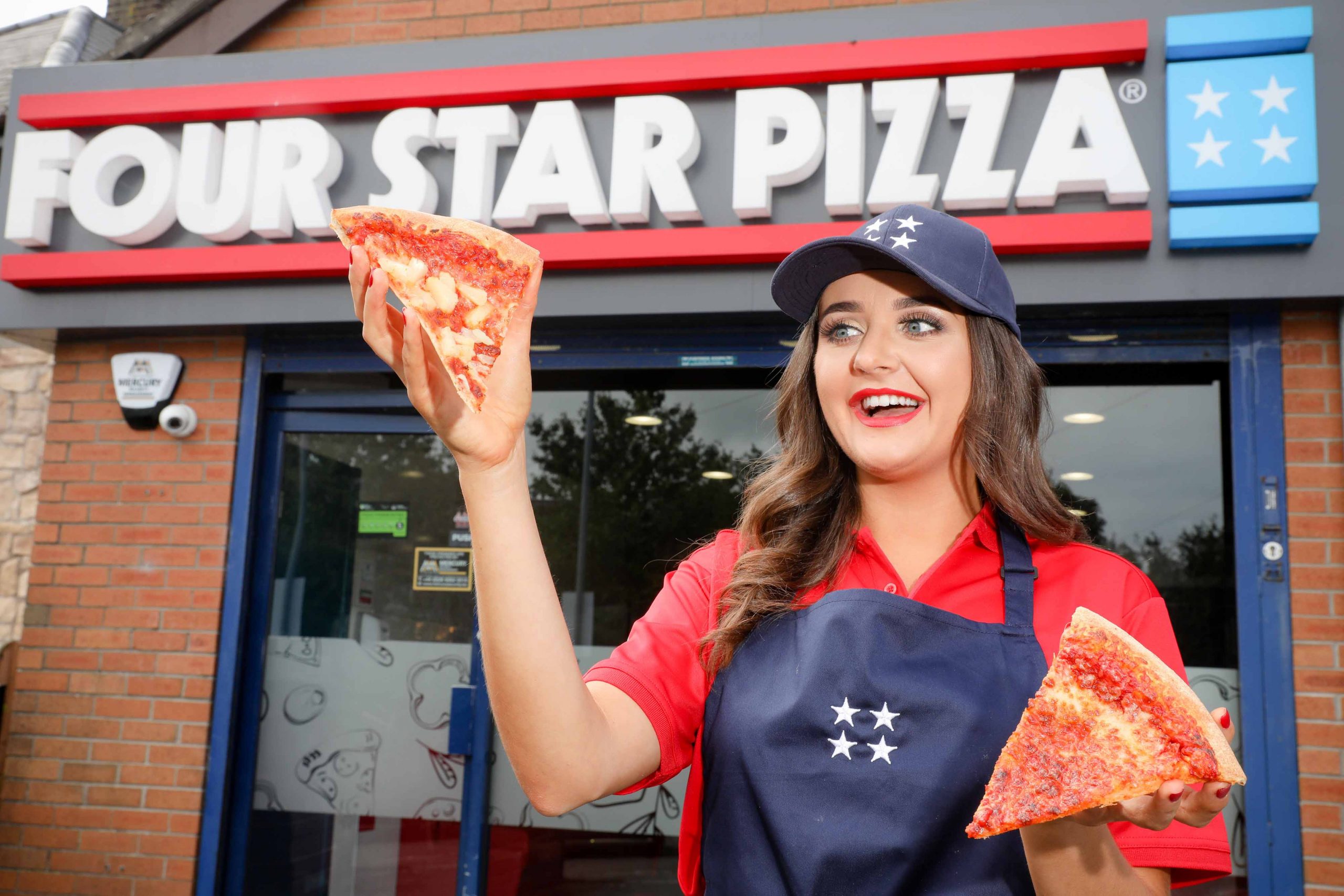 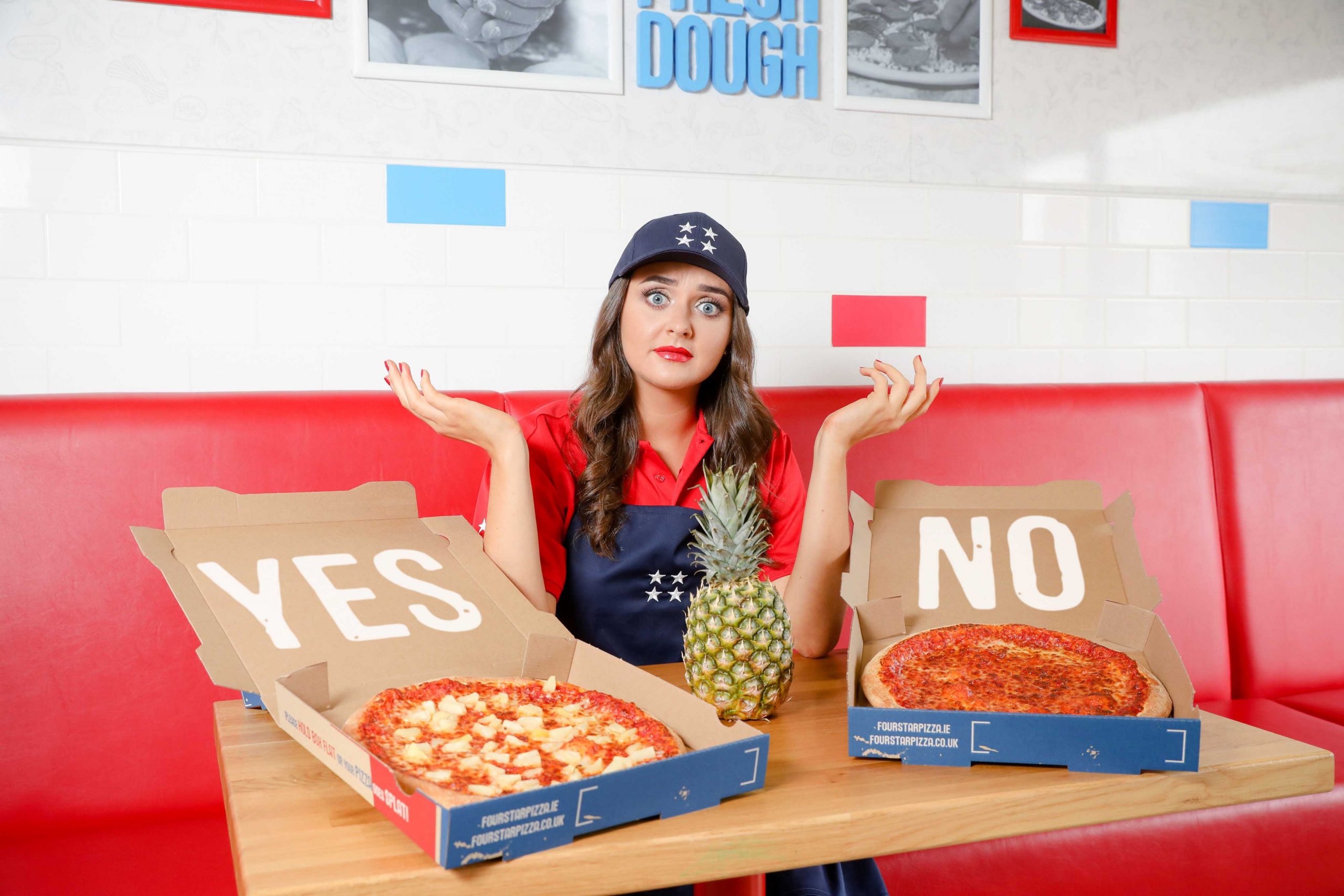 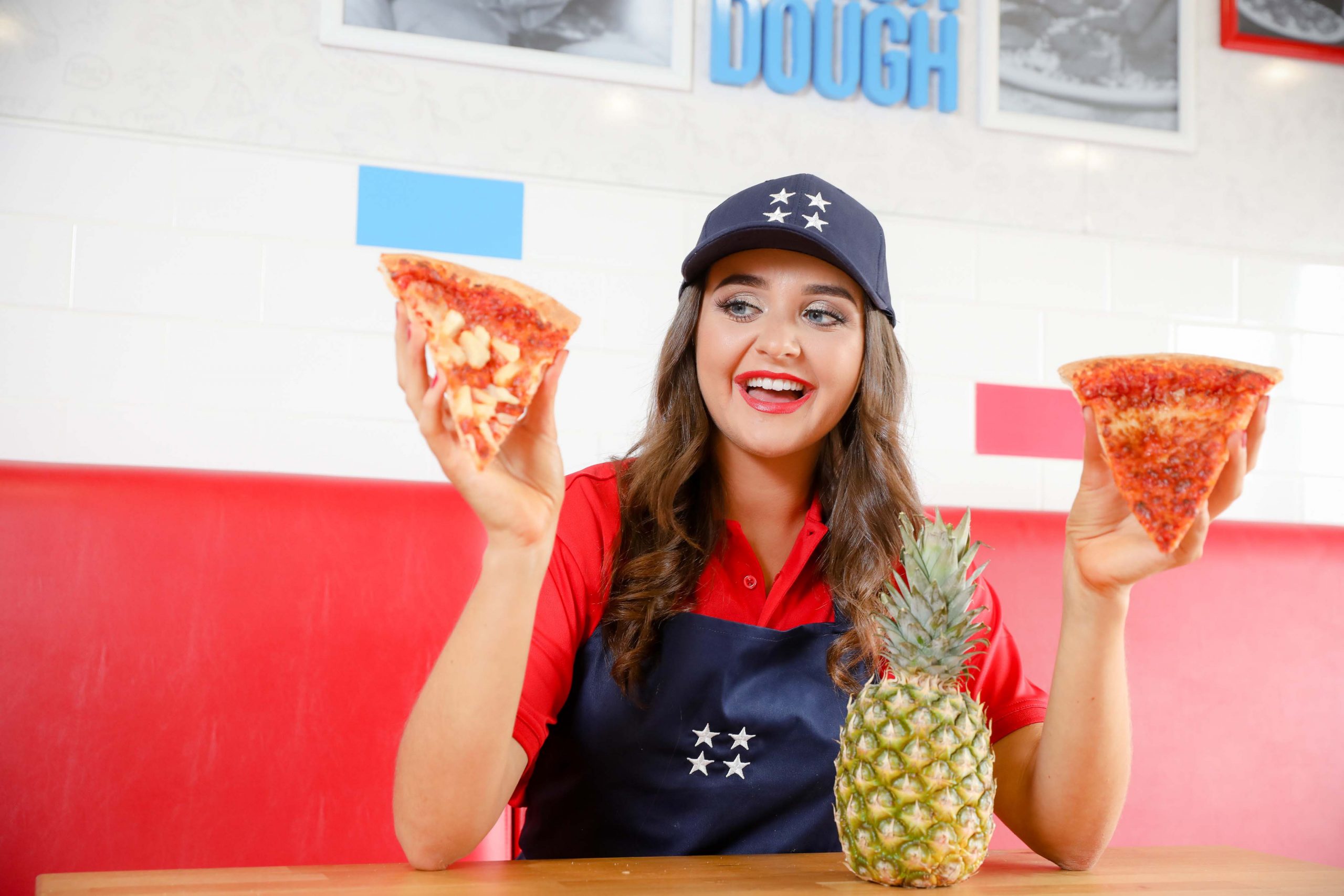 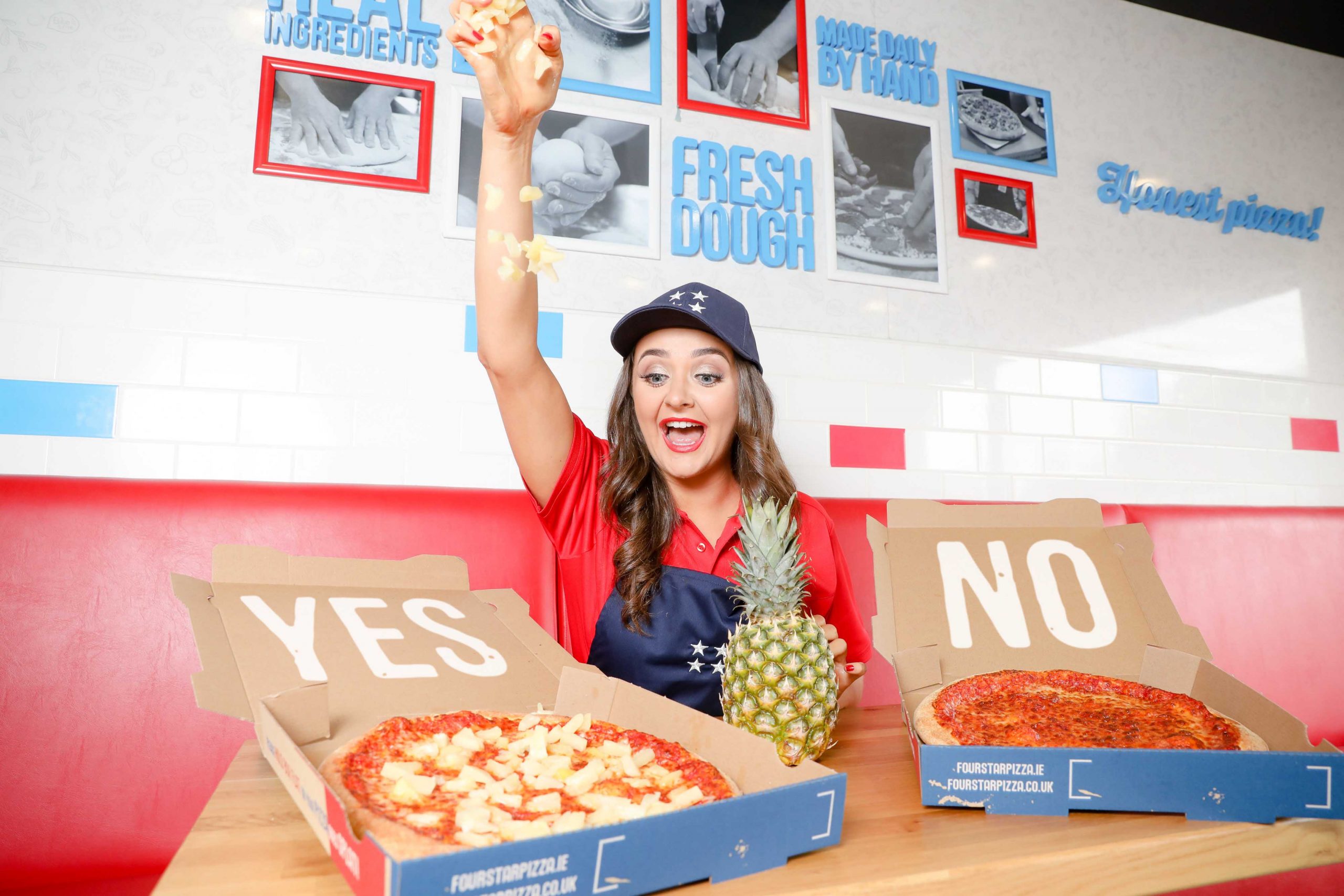 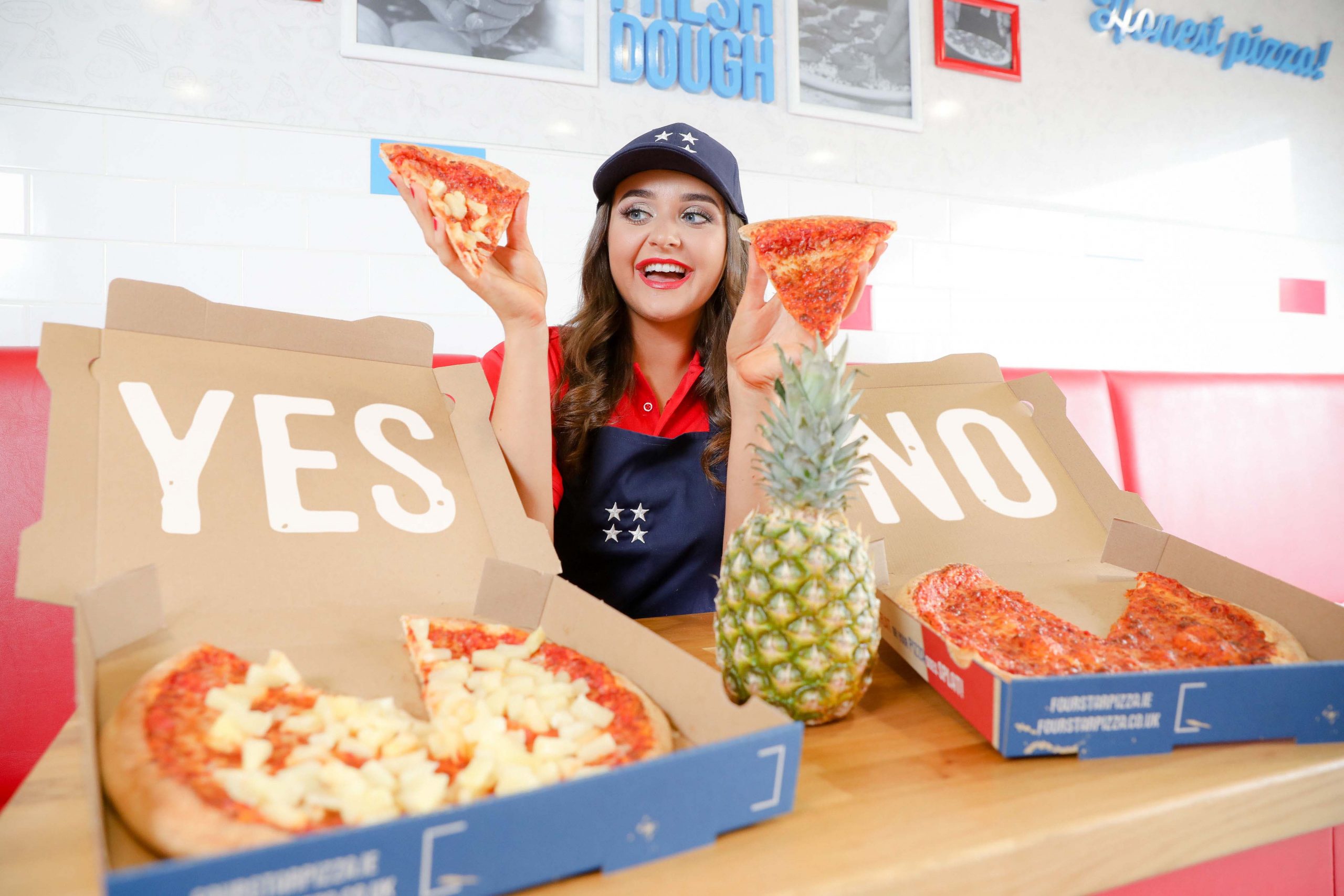 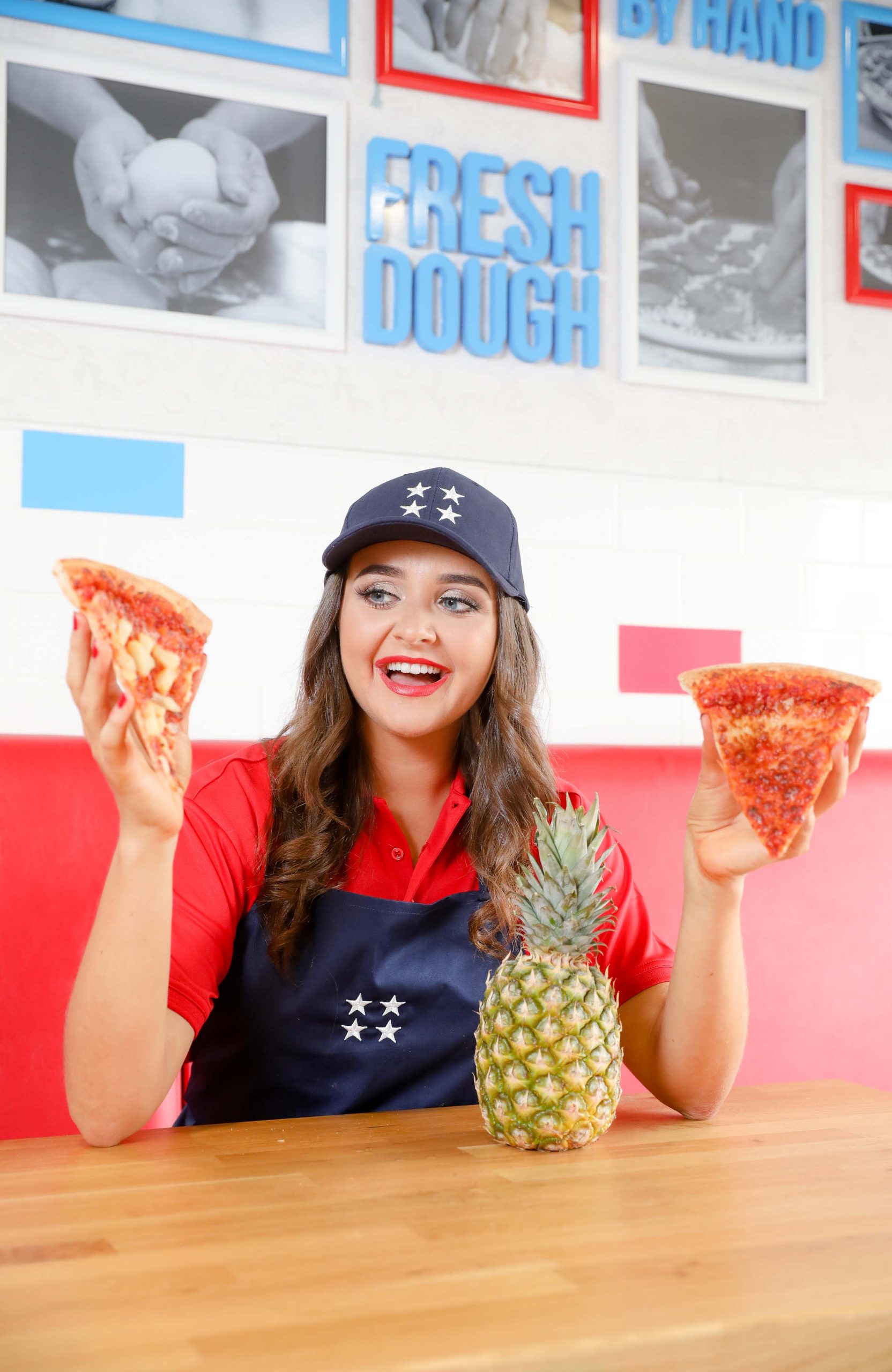 AS National Pineapple day approaches on Saturday June 27, Ireland’s biggest home-grown pizza chain Four Star Pizza has carried out its very own ‘border poll’ to see how attitudes to pineapple, and other pizza preferences, differ between north and south.

Let’s face it, we all love pizza but the prickly question of whether pineapple belongs on one is an age-old debate – and a very divisive one with people seeming to either love or hate the idea, with little or no middle ground!

So Four Star Pizza has tapped into its huge all-Ireland customer base to reveal what pizza lovers on both sides of the border think about pineapple and other important pizza trends.

“We can reveal today that pizza lovers in the Republic of Ireland are bigger fans of pineapple than their neighbours in the north,” said FSP director Brian Clarke.

“In addition, when you look at ‘do-it-yourself’ pizza orders, pineapple is the 10th most popular topping in the south compared to 12th most popular in Northern Ireland.

“So, while the difference is not huge and people seem to like pineapple pizzas on BOTH sides of the border,  it is definitely more popular in the Republic of Ireland than in the north,” concluded Brian.

Sharing is NOT caring

One trend that was common to both markets is that pineapple on pizza is very much a personal preference and not something to be shared.

“What we find in both markets is that pineapple on a pizza is a very individual choice with more personal pineapple pizzas sold than large,” said Mr Clarke.  “From this we can deduce that it’s difficult to get a group of people to agree to ordering (and sharing) a large pizza with pineapple on it.”

In 2017, a YouGov poll revealed that while 84% of Brits like pizza, and a similar 82% like pineapple, only 53% said that they liked pineapple ON pizza, with 41% disapproving of the controversial combination.

A survey amongst Four Star Pizza customers cooked up some very similar findings with 51% giving pineapple on pizza the thumbs up and 49% saying a firm no.

This news would be very much to the annoyance of celebrity chef Gordon Ramsay who is firmly in the ‘no pineapple’ camp, having once said in typical fashion that ““you don’t put ****ing pineapple on pizza”!

A much more diplomatic Brian Clarke said:  “It really is split down the middle, with maybe a slight leaning towards pineapple, and this has been the case for years.  It’s just one of those great debates that will probably go on long after we’ve gone.”

Another person who didn’t sit on the fence in the great pineapple debate was President of Iceland Guðni Thorlacius Jóhannesson who grabbed the headlines in 2017 when he announced that he would like to ban pineapple from pizza – later conceding that this was purely a personal desire, not a policy objective, and that he didn’t have the power to create such a law.

Following President Jóhannesson’s announcement, YouGov research (2017) showed that if any pizza toppings were to be banned, it should not be pineapple but rather anchovies (according to 35% of the British population), followed by olives (20%) and tuna (19%).

Looking at Four Star’s most popular toppings on the island of Ireland, the top five are the same on both sides of the border with pepperoni unsurprisingly leading the way (approximately 63 MILLION slices were used on FSP pizzas last year).  Completing the top five in both markets are ham, chicken, bacon and mushrooms.

FSP’s ‘Pizza Border Poll’ reveals a number of further interesting differences in tastes and trends between pizza lovers in Ni and ROI.

Size matters in the south!

“There is definitely a tendency for people in the Republic of Ireland to order larger pizzas than in the north,” said Brian Clarke.  “The reason behind this we cannot really say.  Maybe they like to share more in the south, or alternatively, they could simply be greedier and like bigger pizzas for themselves!”

The reason for people in Northern Ireland preferring smaller pizzas could well be explained by looking at dessert preferences.

While 46% of customers in ROI prefer four cookies over two, a massive 71% will go for the larger amount in Northern Ireland.

“Our stats show that people in Northern Ireland love their cookies,” said Mr Clarke.  “So much so that it looks like they will order smaller pizzas to leave more room for cookies!”

A couple of findings in the ‘Four Star Pizza Border Poll’ indicate that, when it comes to pizza, people in the Republic have more traditional tastes – while in Northern Ireland, they tend to be a little more adventurous.

Whilst FSP’s traditional ‘Meat Central’ (featuring all the meaty favourites) is the most popular pizza on the menu, in Northern Ireland it is only marginally more popular (0.3% difference) than the ‘Smokey’ pizza with a BBQ sauce base.

“The fact that a relatively new pizza with a BBQ sauce base could potentially be the favourite in Northern Ireland is pretty remarkable,” commented Brian Clarke, “and does indicate a more adventurous taste compared to the traditional meaty favourites with tomato bases.

“This trend is further supported when we look at our most popular side orders – with the traditional Garlic Pizza Bread (37%) and Wedges (23%) topping the charts in ROI.  The situation in NI is very different though with Dough Swirls (29%) coming out on top, ahead of Twisters (28%).

“Similarly, when it comes to chicken items, we find that while Dippers (83%) are way ahead of everything else in the south, people in the north are more than twice as likely to go for hot and interesting sauces.

“So, whilst people in Northern Ireland can sometimes stick steadfastly to tradition in certain matters, when it comes to pizza, they are anything but traditional and like to try something different and interesting,” he added.

Four Star Pizza is a wholly Irish-owned pizza chain with 60 stores on the island of Ireland, including 14 in Northern Ireland.  Last year was a record one for the company, in which it sold approximately 4.75 MILLION pizzas, using almost 63 MILLION pepperoni slices, more than 525 TONNES of cheese and 1050 TONNES of flour in the process.