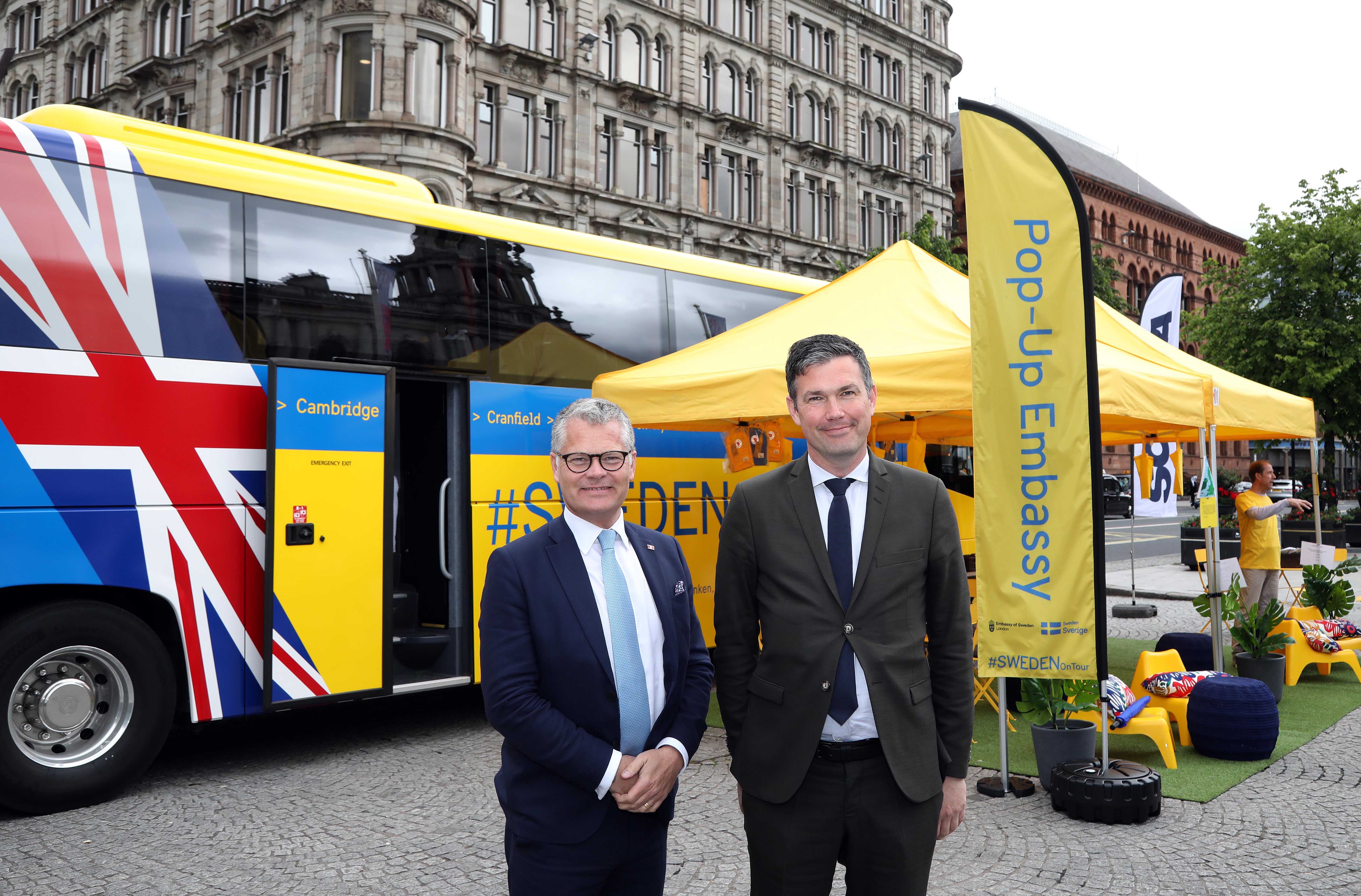 ‘Sweden on Tour’ celebrates National Day of Sweden in Belfast

Stena Line was one of a number of Swedish businesses welcoming the Swedish Ambassador to the UK, H.E. Torbjörn Sohlström and Embassy officials to Belfast to celebrate Sweden’s National Day (June 6).

The Belfast visit was a key part of Sweden on Tour (May 25 – June 8), a UK-wide tour by the Swedish Embassy during which the Ambassador and Embassy officials met with Politicians, people, businesses and institutions who work together to make up the strong relationship between the UK and Sweden.

During the Ambassadors visit to Belfast he hosted a National Day Reception at Belfast City Hall for civic and business representatives and the Swedish community.  In addition, the Embassy paid a visit to the Titanic Belfast Museum and Queen’s University Belfast.

As one of the most prominent Swedish businesses in Belfast, Stena Line’s CEO Niclas Mårtensson joined the celebrations which included a ‘pop-up’ Swedish Embassy at Belfast City Hall, to which the public were invited to ‘pop in’ for some Swedish ‘fika’ (cinnamon buns, biscuits, lingonberry juice and more).

“We are delighted to join the Ambassador and his officials on what is a very important day for Swedish people around the world,” said Mr Mårtensson. “Belfast is very much a home from home for Stena Line and while our headquarters are located in Gothenburg, Belfast has now become one of our most significant hub locations.

“We have been associated with Belfast for over 30 years and we continue to invest heavily in the region.  This includes two brand new ships, Stena Edda and Stena Embla, which are currently under construction and will be introduced on our Belfast-Liverpool service in 2020 and 2021.  These next generation ships will be the largest, most spacious and most comfortable ferries ever to sail between Belfast and Liverpool.”

Ambassador Torbjörn Sohlström said: “I am delighted that Stena Line as well as a number of other Swedish companies were able to join us in Belfast on this very special occasion.  There are a lot of synergies between both countries and I hope that shared values like mutual respect and sustainable growth for the future will act as a strong platform for our countries to build an even closer relationship in the future.”

Stena Line is the largest ferry operator on the Irish Sea, offering the biggest fleet and the widest choice of routes between Britain to Ireland including Belfast to Liverpool and Heysham, Belfast to Cairnryan, Dublin to Holyhead and Rosslare to Fishguard routes, a total of 232 weekly sailing options between Britain and Ireland. Stena Line is also the only ferry company to offer a direct service from Rosslare to Cherbourg with three return crossings a week.