The UK’s only ‘Disappearing Wall’ unveiled in Belfast 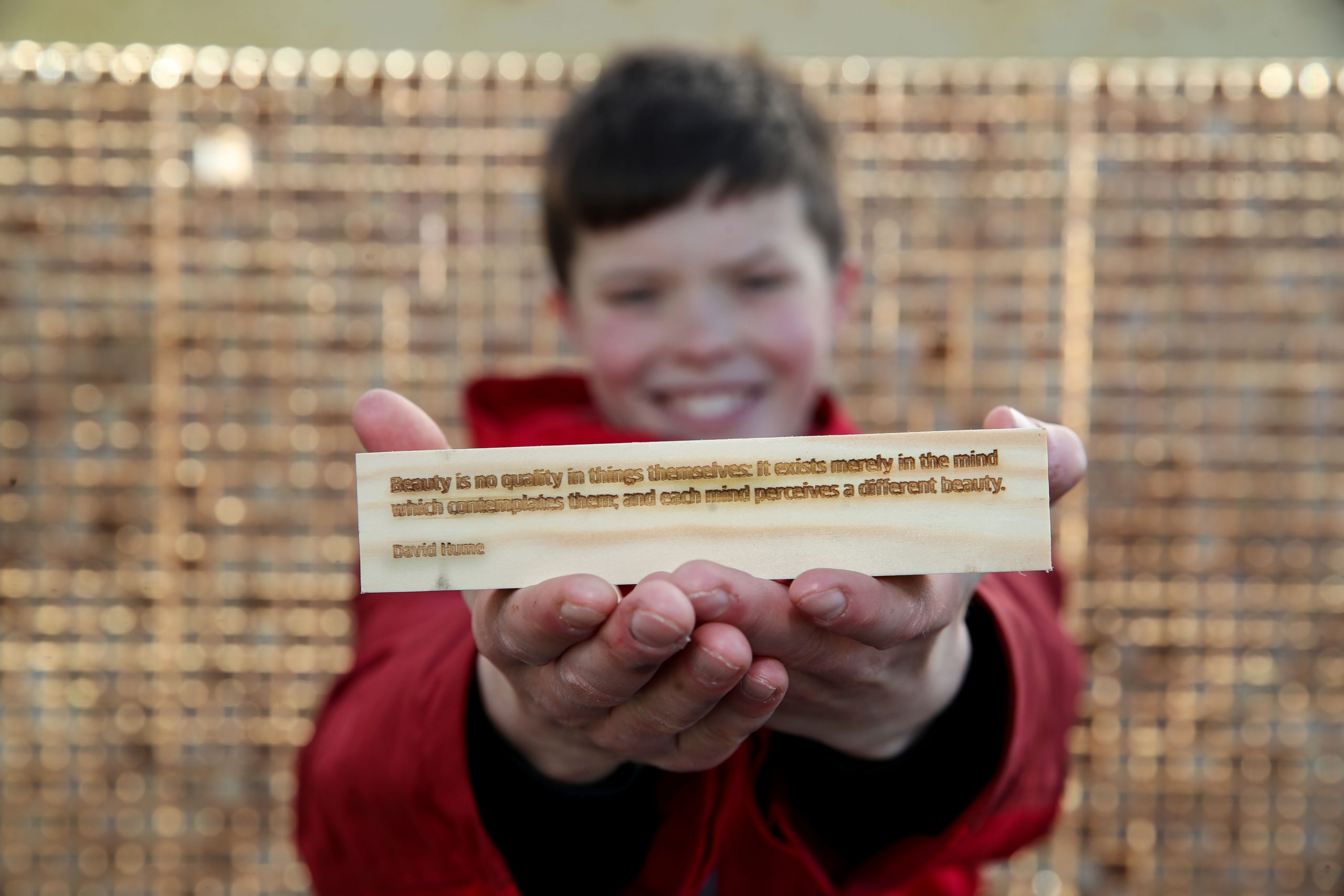 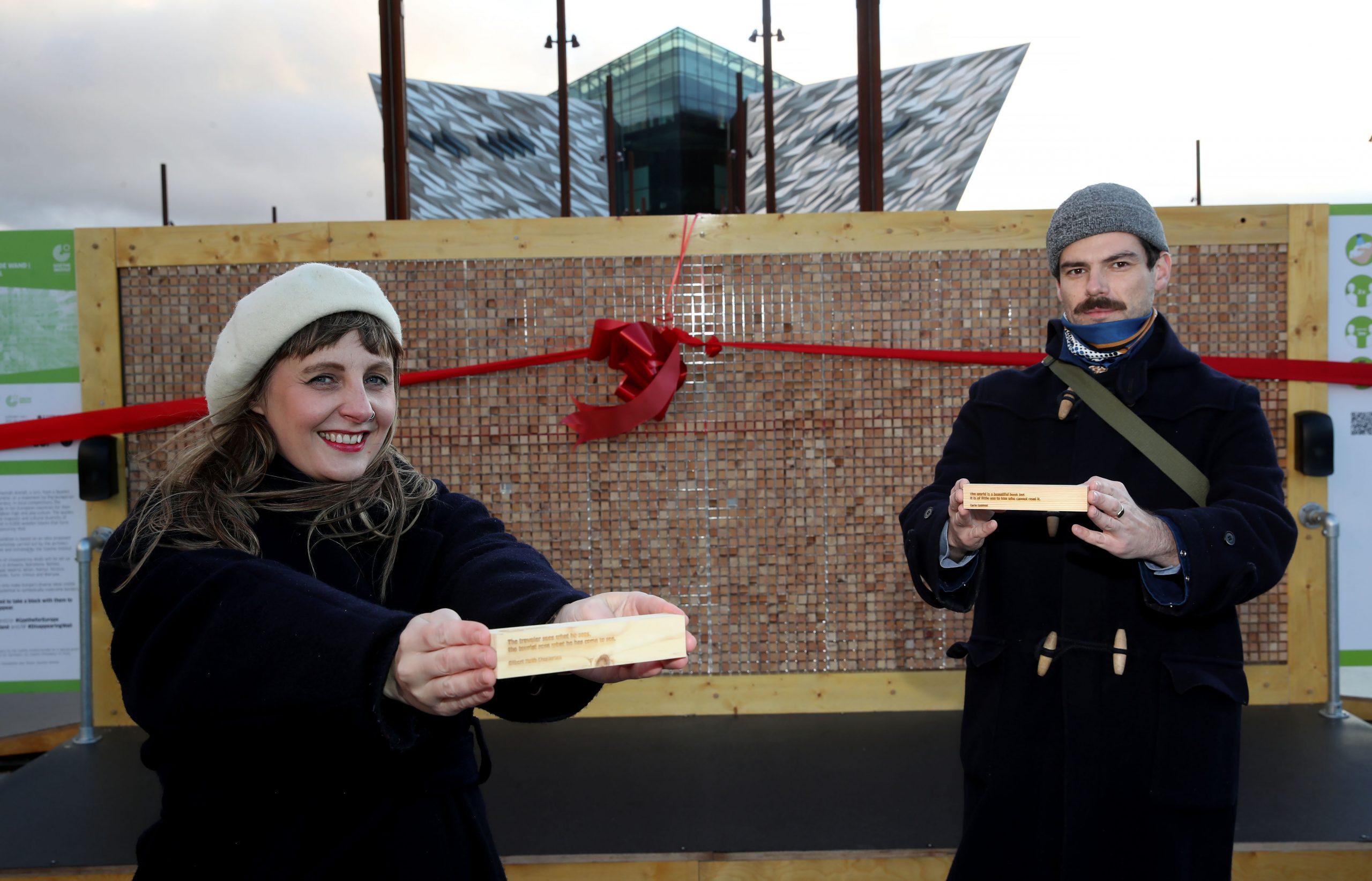 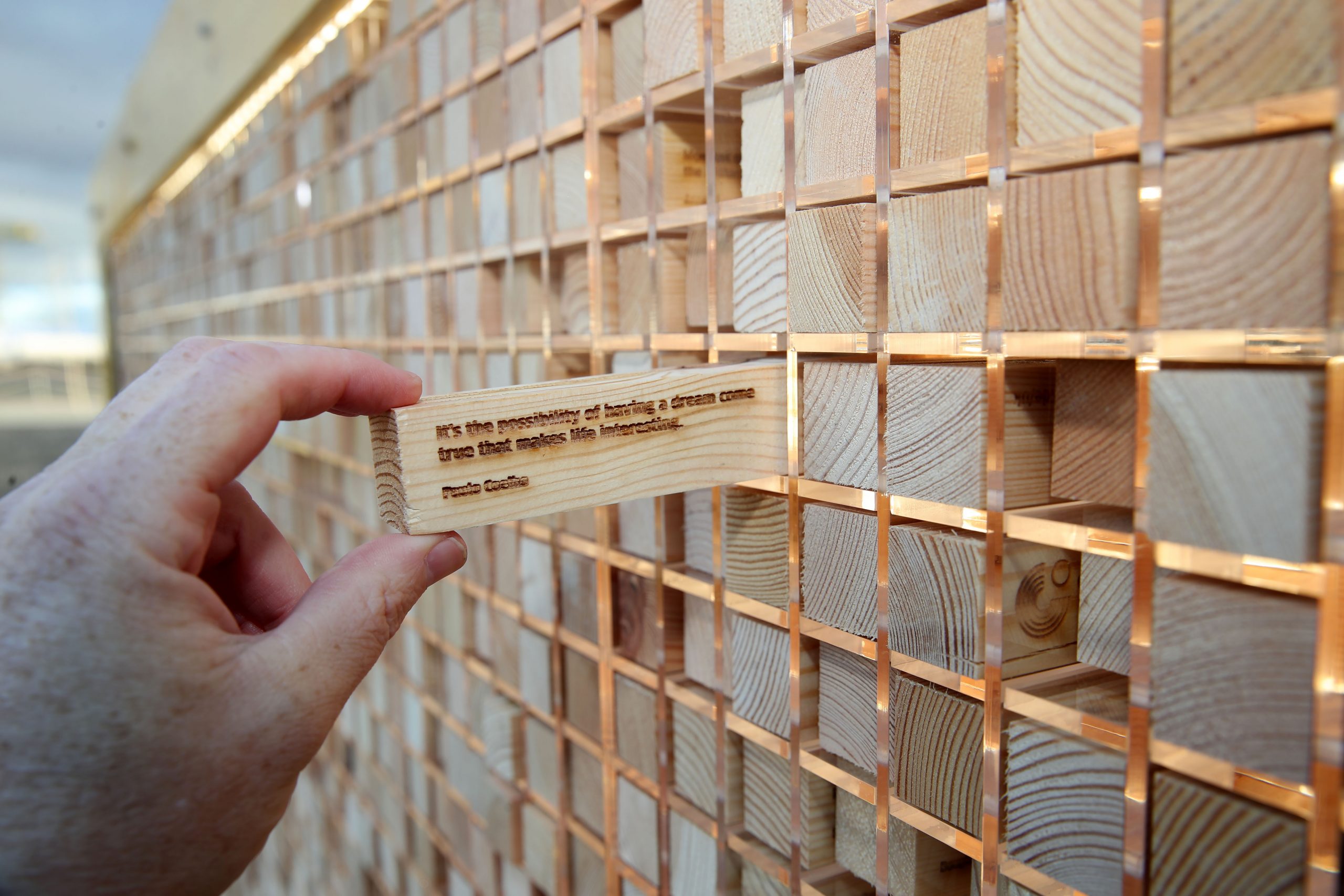 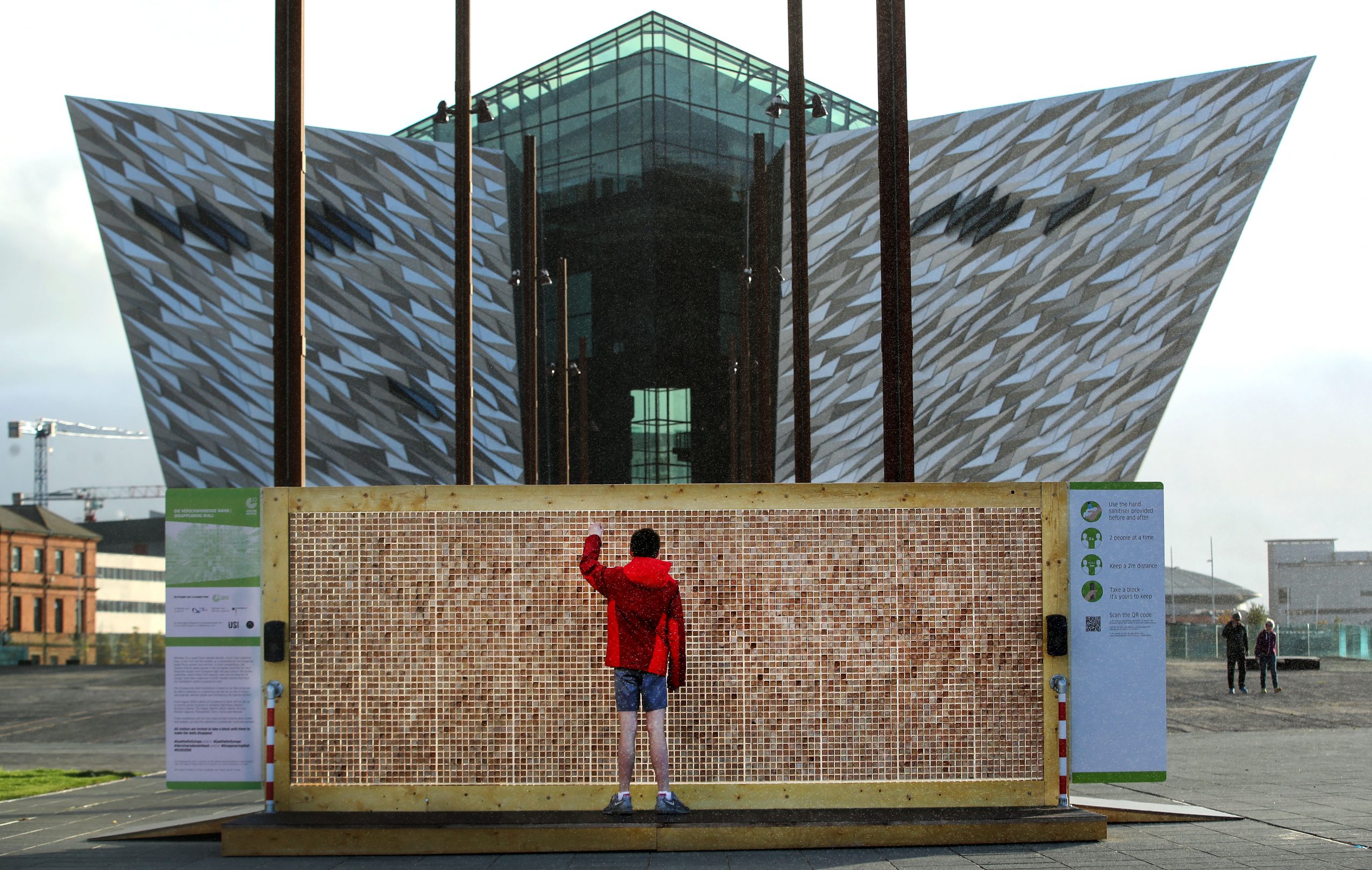 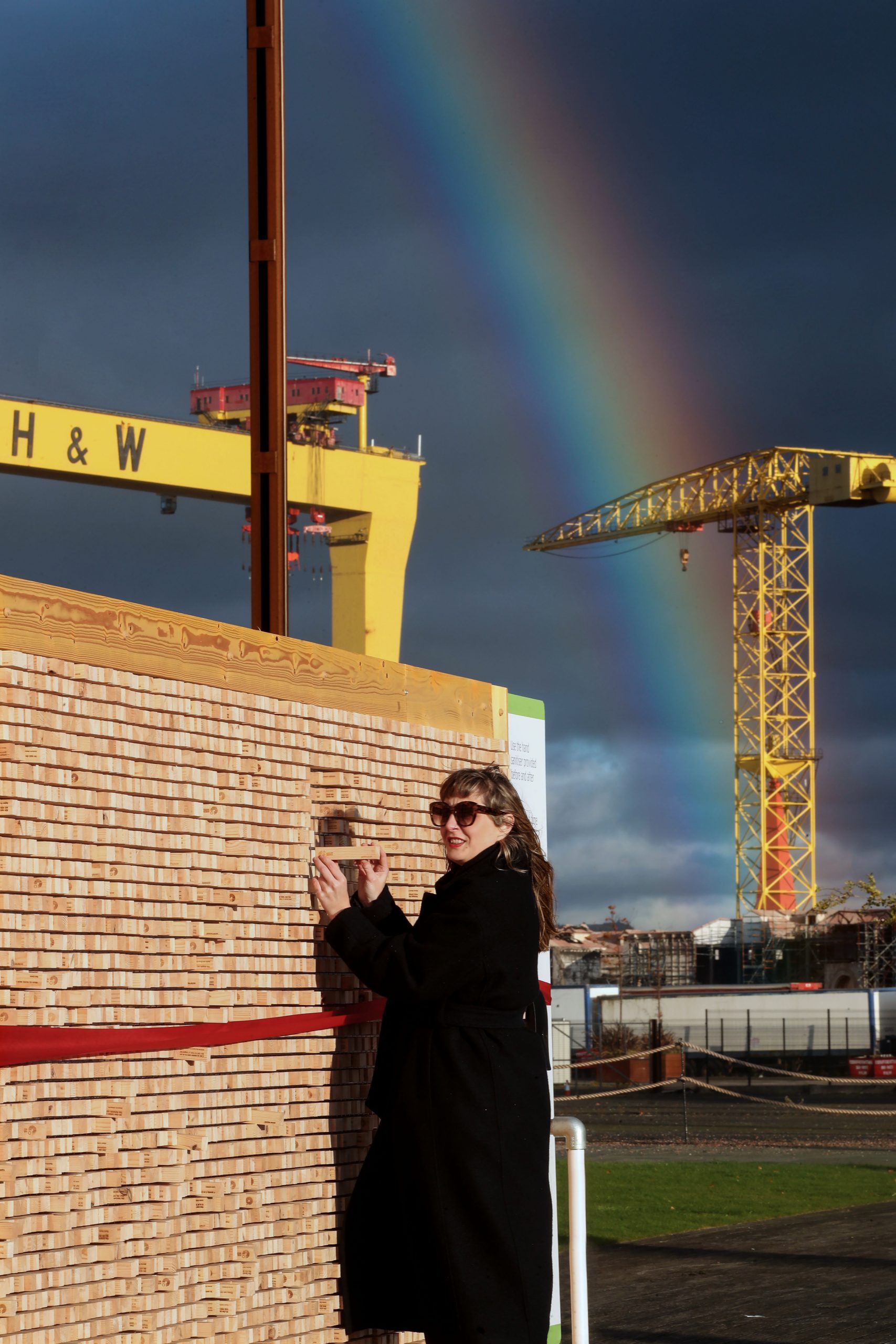 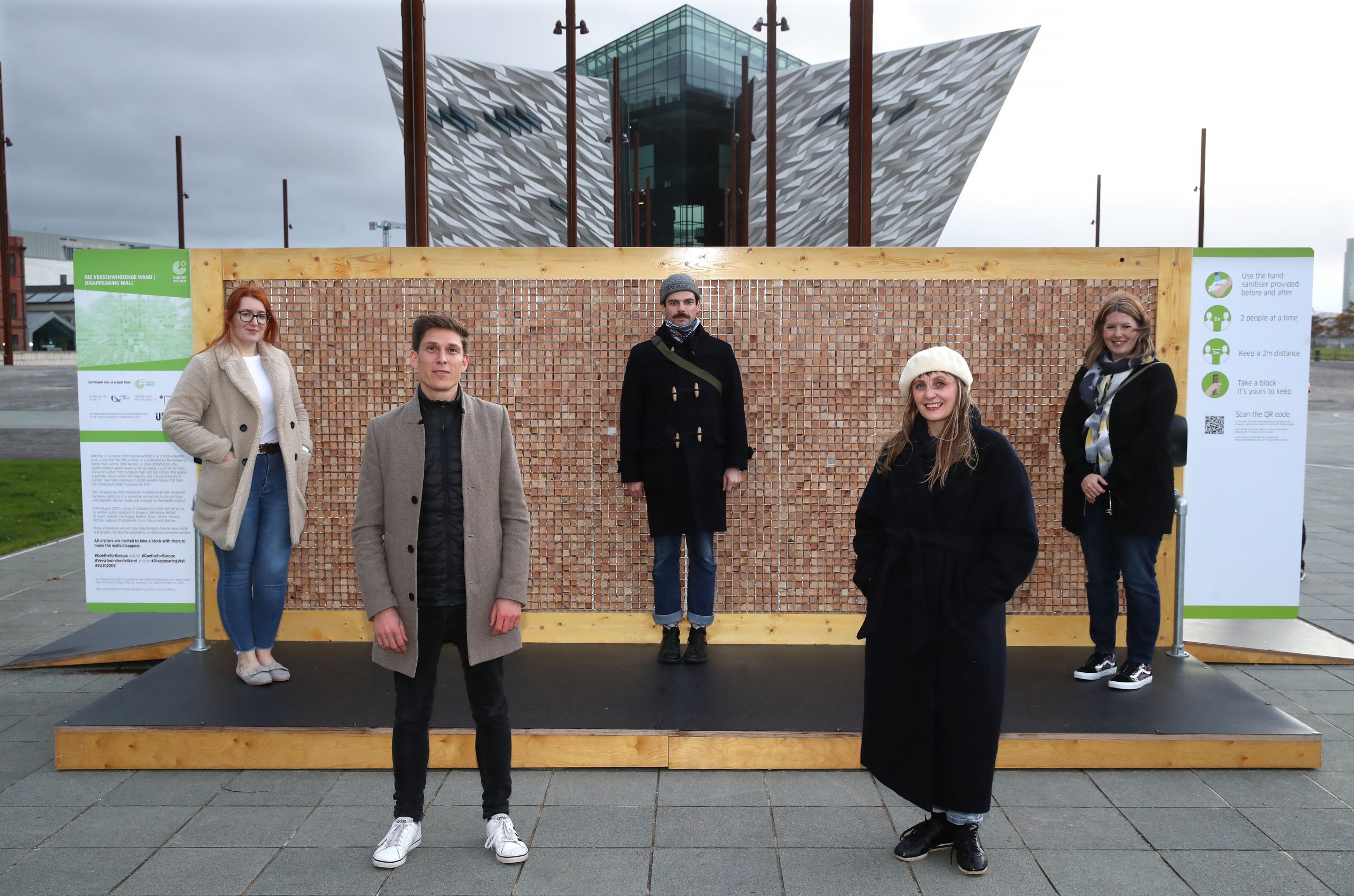 Northern Ireland has joined a select number of European countries including Germany, the Netherlands, Spain, Italy, and Greece as The Disappearing Wall was unveiled at a small ceremony at Belfast’s Titanic Slipways on October 21.

The interactive art installation that celebrates Europe’s diversity of languages and ideas is based on an idea proposed by Maria Jablonina in a workshop carried out by the architect and engineer Werner Sobek and initiated by the Goethe-Institut.

The Disappearing Wall is now on display at the famous Titanic Slipways in front of the iconic museum, Titanic Belfast, until November 11 and passers-by are invited to visit at any time.

The Wall consists of a plexiglas frame which hosts 6,000 wooden blocks shows original and translated quotes collected by the Goethe-Institut earlier this year via local contests across Europe.

Visitors to the Wall are encouraged to take home a block which will contain one of a wide range of quotes, from the likes of Albert Einstein, Adorno, Rosa Luxemburg, Sartre and Jonas Mekas, to Beatles’ lyrics and lines from Winnie the Pooh or the film Amélie.

Health and safety is of upmost priority and sanitising units, directional signage and a QR track and trace coding system are of prominence at the sculpture so people are asked to adhere to the safety guidelines before continuing their walk along the eye-catching Slipways and Maritime Mile.

Those who cannot travel to Belfast to visit The Disappearing Wall have the chance to receive a block of history by registering their interest at www.facebook.com/TheDisappearingWallBelfast where wooden blocks will be set aside for this purpose.

Katharina von Ruckteschell-Katte, Director of the Goethe-Institut London, commented: “We are so proud to see The Disappearing Wall being unveiled to the public in Belfast. This installation celebrates Northern Ireland’s diversity and seeing people from all walks of life visit and take joy in reading the beautifully inscribed blocks shows how some happiness can come at a time of difficulty.”

Goethe-Institut London commissioned Belfast-based Urban Scale interventions (USI) to bring The Disappearing Wall to life in Belfast with Jak Spencer, USI CEO, commenting: “It is so exciting to see The Disappearing Wall take pride of place at Titanic Slipways, Titanic Belfast, after many months of careful planning. NI now has the privilege of joining other European countries hosting The Wall. Experience it yourself as we invite everyone to help make this iconic wall disappear by taking home an historical quote to keep for posterity.”

Thomas Wells of Catalyst Arts said: “Catalyst Arts is thrilled to invite the public to visit The Wall. Working with artists and musicians from Belfast in the run up to this installation, we engaged communities across the city to explore stories and experiences that connect us. Our reach across the four quarters of the city explored the Irish language through arts and craft with Aoife O’Reilly, tales of lived experience through the medium of bingo in North Belfast with Janie Doherty, how we hear with our bodies with John D’Arcy and HIVE choir and the intimate relationship between foraging, fermentation and South Belfast’s Queer history. By working within our community through this platform we now have the possibility to reach out to our European Neighbours though a common language and ideas.

To find out more about the engagement projects and the artists and musicians visit https://www.catalystarts.org.uk”.

The Disappearing Wall is backed by the Federal Foreign Office with special funds for the German EU Council Presidency 2020.  In Northern Ireland, the installation is supported by Catalyst Arts, Urban Scale Interventions, and the Titanic Foundation.